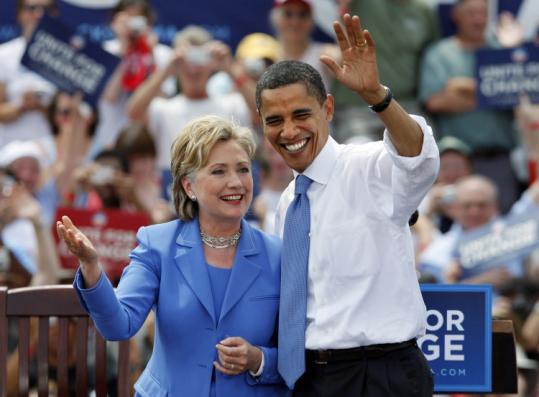 WASHINGTON - The thaw in the resentful relationship between the most powerful woman in the Democratic Party and her younger male rival began at the party's convention this summer, when Senator Hillary Clinton gave such a passionate speech supporting Barack Obama that his top aides leapt out of their chairs backstage to give her a standing ovation as she swept past.

Obama, who was in the first steps of what would become a strategic courtship, called afterward to thank her. By then, close aides to Clinton said, she had come to respect the campaign Obama had run against her. At the least, she knew he understood like no one else the brutal strains of their epic primary battle.

By this past Thursday, when Obama reassured Clinton that she would have direct access to him and could select her own staff as secretary of state, the wooing was complete.

"She feels like she's been treated very well in the way she's been asked," said a close associate of Clinton, who like others interviewed asked for anonymity because the nomination will not be formally announced until after Thanksgiving.

Few are predicting that this new relationship born of mutual respect and self-interest will grow into a tight bond between the new president and the woman who will be the public face of his foreign policy around the world, though some say it is not impossible. They argue that a close friendship between those in those powerful roles is useful but not essential, and is not a predictor of the success of the nation's chief diplomat.

While James A. Baker III was extraordinarily close to the first President Bush and is widely considered one of the most successful recent secretaries of state, Dean Acheson was not a friend of President Harry S. Truman, and Henry A. Kissinger did not particularly like Richard M. Nixon.

"Two of the nation's greatest secretaries of state in the modern period, Dean Acheson and Henry Kissinger, were not personally close but were intellectually bonded to their presidents," said Walter Isaacson, the author of a biography of Kissinger and of the book "The Wise Men," a history of America's postwar foreign policy establishment. "I think that Obama and Clinton could form a perfect partnership based on respect for each other's view of the world."

Colin L. Powell, President Bush's first-term celebrity secretary of state, would appear to be a cautionary tale for Clinton, since his relationship with the president was strained, and he left office a bitter man. But Condoleezza Rice, Bush's second-term secretary of state, is generally not viewed as having the success her unusually tight bond with the president might have engendered.

In the Obama-Clinton relationship, advisers say, the relatively smooth nature of their talks about the secretary of state job indicate that both, for now, have a working chemistry. The advisers say that while Obama was clearly interested in bringing a rival under his wing, he also recognized that Clinton does not have the outsize ambitions and insecurities of her husband, and Obama admired her discipline and focus.

At the same time, Obama's advisers said, he had the self-confidence to name a global brand as his emissary to the world. He recognizes, they said, that after Jan. 20, he will have to build the kind of relationship that ensures that foreign leaders know that when Clinton speaks, she is speaking directly for him.

"It helps to have a relationship that Bush had with Baker, that's no doubt true," said Martin Indyk, the former American ambassador to Israel, who was a supporter of Clinton in the primary battles. "But if they are seen as working together effectively, I think that can be easily overcome. I don't think he would have decided to appoint her if he didn't want her to be effective."

Obama and Clinton first spoke after their primary fight on a flight in June to Unity, N.H., their first stage-managed appearance after Obama won the nomination. As they settled into their seats on Obama's plane, the conversation, according to people on both sides, was far less awkward than they had feared. Over the passing weeks, the relationship gradually improved.

"They got past this long before their supporters and the party activists did," said one Democrat who is close to both senators.

After Clinton's speech in support of Obama at the Democratic convention, she crisscrossed the country tirelessly to campaign for him - so much so that Obama told aides he was impressed by the sheer number of events Clinton was doing on his behalf.

He began calling Clinton after some of the events - he dialed directly from his cellphone to hers one day in Michigan and another day in Florida - to check in and thank her for helping.

By then, their intense primary fights over policy, which both sides now insist was more about heat than substance, had long receded.

Since the election, Clinton has talked to Obama only a handful of times, even as two close advisers to Obama who held top positions in the Clinton administration - Rahm Emanuel and John Podesta - have served as key negotiators between them on the secretary of state position.