The proposals address a wide range of facilities 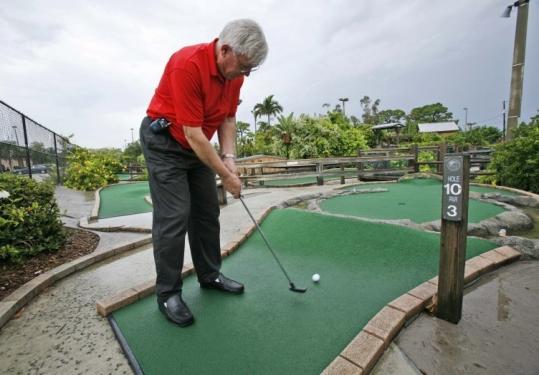 WASHINGTON - Thousands of gallons of water pulse through cascading waterfalls and rapids at Adventure Mini Golf in Lake Worth, Fla. The course, which covers about an acre, features different elevations.

When people ask whether it's accessible for the disabled, owner Jerry Doser says he jokingly tells them, "No, but I'll paint some lines in the parking lot and put some cups out there and then you can play."

"But who wants to pay to play that?" he adds.

Courses like Doser's could end up in the annals of miniature golf history.

Miniature golf courses are among the millions of businesses and other public facilities that would be affected by proposed regulatory changes under the Americans with Disabilities Act, the milestone 1990 civil rights law that prohibits discrimination on the basis of disability.

The proposed regulations address a wide range of facilities - including access to courthouses, drinking fountains, amusement park rides, stadium and theater seating, fishing piers, boat slips, and bowling lanes - and establish specific requirements for qualifying accessible designs. For miniature golf courses, 50 percent of the holes would have to be accessible for players in wheelchairs.

The 1,000 pages of regulations proposed by the Justice Department are drawing intense scrutiny from businesses that foresee a financial drain and disability rights advocates who say they are long overdue and don't go far enough. Both groups say they want more clarity.

"We have a very mixed sense of what's happened," said Curtis Decker, executive director of the National Disability Rights Network. "They left a lot of things unanswered."

Costs to 7 million affected businesses plus state and local government agencies would total $23 billion over 40 years, according to the Justice Department. But they would also realize billions from being more accessible to disabled customers. The Census Bureau says there are more than 51 million disabled Americans, representing 18 percent of the population.

The rules would apply to new businesses and facilities and to alterations of existing ones. Businesses also would have to remove "readily achievable" barriers - changes that don't require a lot of difficulty or expense. The proposal was published by the government last month. Final regulations could take effect next year, after a period for public comment.

The proposed regulations also define "service animals" for the blind and other disabled groups as dogs or other domestic animals; the regulations would exclude wild animals such as monkeys, which people with spinal cord injuries sometimes use for help with daily activities.

Disability advocates pointed to ticket fraud, information technology - such as check-in kiosks at hotels or airports - and closed-captioning at movie theaters as areas that still need to be addressed.

They also said they are concerned about a "safe harbor" provision that would let small businesses meet their obligation to remove barriers in a given year if, in the preceding year, they spent at least 1 percent of their gross revenues on barrier removal.

"We are worried about people claiming 'we did this, this and this, we renovated the bathroom on the second floor' but you still can't get in the three steps at the front door," said Kleo King, senior vice president of accessibility services at United Spinal Association. "There's too much room for abuse here."

Business groups fear the rules will lead to a new round of lawsuits claiming that facilities are not ADA compliant. Business owners have long complained about "drive-by" ADA lawsuits that they say are simply attempts by lawyers to get quick cash settlements.

Both sides said much uncertainty remains and are asking the Justice Department to clarify some points before releasing the final rules.

"Picture yourself as a small- to medium-sized business saying to yourself, 'What is this all about? What changes do I need to make?' " said Randel Johnson, a vice president at the US Chamber of Commerce. "Figuring out the changes you may need to make or not make, that's an enormous amount of time and legal fees."

Not everyone though is worried. Brad McDermott, a spokesman for the YMCA of the USA, said most YMCAs are already in accordance and it shouldn't be difficult for those that aren't to comply.

Doser, the miniature golf course owner, figures he'll be OK with any new regulations since he's not planning any renovation or remodeling.

"I've tried to think about how expensive and how hard it would be to get rid of those sets of stairs - you would have to destroy half the golf course," he said. "Economically it's not feasible."