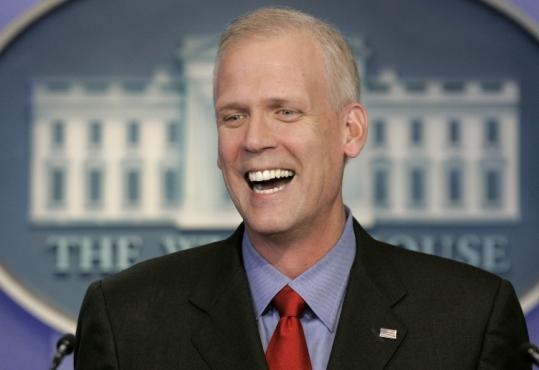 WASHINGTON - Tony Snow the former television and radio talk-show host who became President Bush's chief spokesman and redefined the role of White House press secretary with his lively banter with reporters, died early yesterday morning after losing a battle with cancer. He was 53.

Mr. Snow was first diagnosed with colon cancer and treated in 2005, a year before joining the White House staff. But he discovered it had returned after an operation in March 2007 to remove what doctors thought was a benign growth in his lower abdomen.

The cancer had spread to his liver, forcing Mr. Snow off the podium for treatment.

Mr. Snow vowed to fight the disease and return to the briefing room but announced six months later that he was leaving his $168,000 job because he needed to recoup the income he lost when he left his job as a radio and television host. He later joined CNN as a commentator.

In a statement the White House issued yesterday morning, President Bush said: "Laura and I are deeply saddened by the death of our dear friend, Tony Snow. . . . Tony was one of our nation's finest writers and commentators.

"He earned a loyal following with incisive radio and television broadcasts. He was a gifted speechwriter who served in my father's administration. And I was thrilled when he agreed to return to the White House to serve as my press secretary. It was a joy to watch Tony at the podium each day. He brought wit, grace and a great love of country to his work.

"All of us here at the White House will miss Tony, as will the millions of Americans he inspired with his brave struggle against cancer."

In his brief tenure as the president's public advocate, Mr. Snow became perhaps the best-known face of the Bush administration after the president, vice president, and secretary of state.

Parlaying skills honed during years at Fox News, Mr. Snow offered a daily televised defense of the embattled president that was robust and at times even combative while still repairing strained relations with a press corps frustrated by years of rote talking points.

He was lively and entertaining, he could be disarmingly candid when ducking a question, and he did not hesitate to retreat when it became clear he had gone too far.

He could tell reporters to "zip it" one minute while defusing tension the next by admitting that he knew so little on a topic that he was "not going to fake it."

He enjoyed the give-and-take of a tough briefing, but his smile, upbeat energy, and glib repartee seemed to take the edge off sometimes rough rhetoric on behalf of an unpopular leader and unpopular policies.

When Bob Woodward of The disclosed internal White House maneuvering to push out then-defense secretary Donald Rumsfeld, Mr. Snow tried to dismiss the account with a memorable putdown. "The book is sort of like cotton candy: It kind of melts on contact," he said.

When a flamboyant radio reporter demanded to know whether Mr. Snow was going to evade a typically offbeat question, Mr. Snow chuckled. "No," he said, "I'm going to laugh at it."

Cancer, Mr. Snow later said, was "the best thing that ever happened to me" because it brought him closer to his wife, Jill, and their three school-age children and made him appreciate what was really important in life.

He became an evangelist for a positive attitude and not letting cancer take over one's life. He constantly wore a yellow LiveStrong wristband popularized by Lance Armstrong, and choked up at his first televised White House briefing when discussing his experiences, an emotional display he later jokingly called his "Ed Muskie moment."