$8b of this year's harvest destroyed 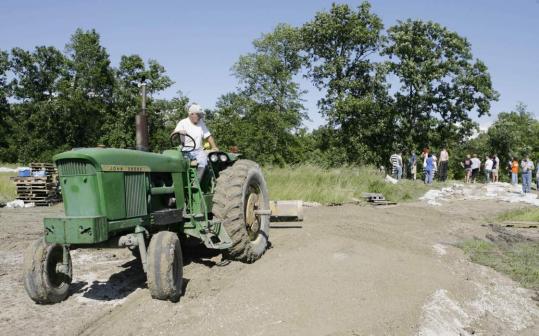 WASHINGTON - Hard work and a bulldozer will help Kim Dummermuth finish planting his corn and soybeans. The rich topsoil lost to floods this month won't be restored so quickly.

"It will take a few years to get the productive capacity back," said Dummermuth, taking a break on his northeast Iowa farm to eat one of the sandwiches his wife, Lois, brings him at lunchtime before he begins to clear Turkey River sand out of his cornfield.

The flooding wiped out more than $8 billion of this year's crops, according to the America Farm Bureau Federation. For at least the next decade, farmland along the Mississippi River and its tributaries may require more fertilizer to make the soil rich enough to maintain yields, said Jerry Hatfield of the US Department of Agriculture. That will push up costs. The price of fertilizer rose 69 percent in the past year.

"It takes 100 years to build an inch of topsoil," said Hatfield, director of the USDA's National Soil Tilth Laboratory, a land-management study center in Ames, Iowa. Tilth refers to soil's suitability for farming. "The floods washed it away in minutes."

Other farmers replaced this season's washed-out corn with soybeans, which grow faster, Downey said. The flood's impact may be larger next year, as producers switch back to corn to make up for this year's production losses. US corn acreage in 2009 may reach 95 million acres, the most since 1944 and at least 10 percent more than Agrium forecasts for 2008, he said.

The lost growing season and abandoned acreage sent corn futures up 28 percent this month to a record of $7.95 a bushel Thursday. Corn has more than doubled in the last year on increased export demand and use of grain-based ethanol. The United States is the world's biggest producer and exporter of corn.

The waters are starting to recede in Iowa, the top US grower of corn and soybeans, as the flooding moves south. About 59 percent of planted US corn and 57 percent of soybeans were in good or excellent condition as of June 22, compared with 73 percent and 66 percent a year earlier, according to the USDA.

Iowa corn yields are expected to fall 16 percent because of the flood, according to the Farm Bureau, the largest US farmer group. The USDA lowered its corn production forecast by 10 percent in a June 10 report based on data collected before the worst flooding.

Dummermuth said he already knows he won't sell much of the corn he's replanting. He plans to chop up the stunted crop and feed it to his livestock.

He's ceding 5 acres of his land to the Turkey River, moving a dike farther inland to help contain the next severe flood.

And there will be another, he said.