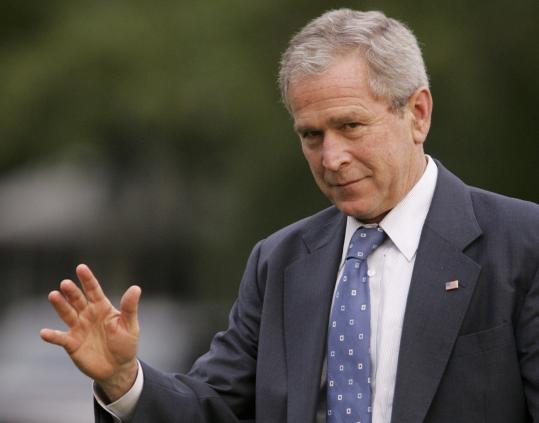 WASHINGTON - President Bush is accusing Democrats in Congress of blocking his energy proposals, saying they are partly to blame for high gasoline costs pinching Americans' budgets.

In his Saturday radio address, Bush urged Congress to lift its long-standing ban on offshore oil and gas drilling to increase US energy production. Democrats have rejected the idea.

"This is a difficult time for many American families," Bush said. "Rising gasoline prices and economic uncertainty can affect everything from what food parents put on the table to where they can go on vacation."

Bush said offshore drilling could yield up to 18 billion barrels of oil over time, although it would take years for production to start.

There are two prohibitions on offshore drilling, one imposed by Congress and another by executive order signed by Bush's father in 1990. Bush's brother, Jeb, fiercely opposed offshore drilling when he was governor of Florida. What the president now proposes would rescind his father's decision - but the president took the position that Congress had to act first.

Congressional Democrats have been quick to reject the push for lifting the drilling moratorium, saying oil companies already have under lease 68 million acres on federal lands and waters - outside the ban area - that are not being developed. Drilling proponents say that number is misleading because sometimes it takes years for actual development.

"This week, President Bush and his Republicans allies rallied behind the oil industry's political agenda once again and advocated opening more of America's federal land, including coastal areas, to drilling," Representative Nick Rahall, a West Virginia Democrat who chairs the House Natural Resources Committee, said in the Democratic response. "This proposal will not bring the type of relief Americans deserve at the pump."

Bush says he wants to ease the regulatory process to expand oil refining capacity and lift restrictions on oil shale leasing in the Green River Basin of Colorado, Utah, and Wyoming. Oil shale is a type of rock that can produce oil when exposed to heat and other processes.

"One major deposit in the Rocky Mountain West alone would equal current annual oil imports for more than 100 years," Bush said. "Unfortunately, Democrats in Congress are standing in the way of further development."

Bush said that in a spending bill last year, Democratic leaders inserted a provision blocking oil shale leasing on federal lands. "That provision can be taken out as easily as it was slipped in - and Congress should do so immediately," he said.

Bush also reiterated his desire to open the Arctic National Wildlife Refuge for drilling, saying scientists have developed ways to reach this oil in northern Alaska with little impact on the land or local wildlife.

"I ask them to reconsider their positions," he said. "If congressional leaders leave for the Fourth of July recess without taking action, they will need to explain why $4-a-gallon gasoline is not enough incentive for them to act."