Computers, files seized About 17 others subpoenaed, too 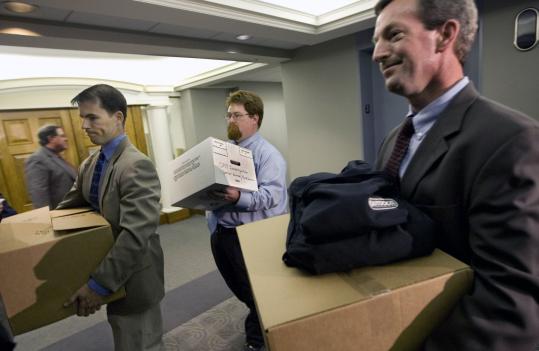 WASHINGTON - Federal agents yesterday swarmed the home and office of the Bush administration official responsible for protecting government whistle-blowers as part of an investigation into whether the official retaliated against his employees and obstructed justice.

More than a dozen agents participated in the daylong raid, temporarily shutting down the e-mail and computer systems of the Office of Special Counsel, and confiscating several desktop computers, including that of Scott J. Bloch, the agency head. Bloch's home in suburban Virginia also was raided, and agents from the FBI and the Office of Inspector General for the Office of Personnel Management were seen carting off boxes of documents into unmarked government sedans.

The series of events made for another strange chapter in the career of a conservative lawyer loyal to President Bush who ended up defying expectations as well as his administration bosses.

Bloch came to Washington from Kansas in 2001 and worked on the president's faith-based initiatives in the Justice Department. Because of his background in employment law, he was later recommended for the Office of Special Counsel. He brought notoriety to the obscure government agency by raising questions about the rights of gay federal workers and alienating career staff through a series of policy and personnel moves.

The agency is charged with enforcing discrimination bans, whistle-blower protections, and the Hatch Act, the 1939 statute that limits use of government resources for campaign purposes.

While administration figures began raising questions about his management, he opened high-profile investigations of prominent figures at the White House and Justice Department. Now the process has come full circle with the FBI - an arm of the Justice Department - investigating him.

"The Bush administration has been unable to make up its mind whether to ignore him or to act against him," said Tom Devine, legal director for the Government Accountability Project, an advocacy group for whistle-blowers. "Mr. Bloch is finally being held accountable for the same cover-ups that he is supposed to be policing. It is a very positive step."

The FBI confirmed the raid, saying that agents yesterday had "conducted a number of court-authorized federal search warrants" related to the Office of Special Counsel, but declined to elaborate.

Bloch has denied any wrongdoing. His office issued a brief statement saying, "We are cooperating with law enforcement. We do not yet know what this is about. Meanwhile, we are continuing to perform the independent mission of this office."

The testimony of Bloch and other employees in the office is being sought by a federal grand jury.

Bloch, who grew up in Los Angeles and was the son of a television writer, has run the independent agency since 2003.

Since 2006, the Office of Personnel Management has been investigating allegations that he retaliated against employees at the agency who disagreed with his views on subjects such as whether federal law prohibits discrimination based on sexual preference. The probe was launched after a group of current and former Office of Special Counsel workers filed a complaint alleging that Bloch had retaliated against them through intimidation and transfers.

The probe gained traction late last year in the wake of a published report that he had hired a private computer repair company, Geeks on Call, to clean his office computer. Bloch has told congressional investigators that he called the company to eliminate a computer virus that was threatening the system. Critics have suggested that he might have been purging the system of information of potential interest to investigators - a charge he has denied.

Just a week ago, a lawyer representing public interest organizations and employees of the Office of Special Counsel wrote to Bush asking that Bloch be removed because of "his unbroken record of misconduct and malfeasance." The 17-page letter by Debra S. Katz claimed that Bloch had launched high-profile inquiries against the administration to keep himself in the spotlight and insulate himself from administration efforts to hold him accountable.

In one of his first official acts, Bloch ordered his staff to remove references to the agency's jurisdiction over "sexual orientation discrimination" from its website and publications.

Complaints began to surface from the office that Bloch had used harassment and intimidation against employees who balked at his initiatives.

But Bloch's office also was credited for its handling of complaints from whistle-blowers at the Federal Aviation Administration.