1 in 5 veterans found with mental disorder 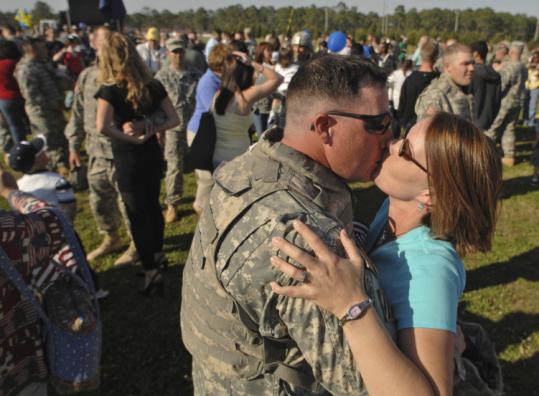 WASHINGTON - The latest and most comprehensive study of veterans of the Iraq and Afghanistan wars has concluded that nearly 1 in every 5 veterans is suffering from depression or stress disorders and that many are not getting adequate care.

The study shows that mental disorders are more prevalent and lasting than previously known, surfacing belatedly and lingering after troops have been discharged into civilian and family life.

An estimated 300,000 veterans among the nearly 1.7 million who have served in Iraq and Afghanistan are battling depression or post-traumatic stress disorder. More than half of those people, according to the study conducted by the Rand Corp., are slipping through the cracks in the bureaucratic system, going without necessary treatment.

The Rand study underscores one of the hard lessons of modern counterinsurgency conflicts: Such wars might kill fewer soldiers than traditional fights but can leave deeper psychological scars.

Screening techniques for stress disorders are vastly improved from previous wars, making comparisons with Vietnam, Korea, or World War II difficult or impossible. But a chief difference is that in Iraq and Afghanistan, all service members, not just combat infantry, are regularly exposed to roadside bombs and civilian massacres. That distinction subjects a wider swath of military personnel to the stresses of war.

"We call it '360-365' combat," said Paul Sullivan, executive director of Veterans for Common Sense. "What that means is veterans are completely surrounded by combat for one year. Nearly all of our soldiers are under fire, or being subjected mortar rounds, or roadside bombs, or witnessing the deaths of civilians or fellow soldiers."

Military officials praised the Rand study yesterday, arguing that its findings were consistent with their studies and said it would reinforce their efforts to try to improve mental health care. Veterans Affairs officials, while questioning the study's methodology, said their department has intensified efforts to find discharged service members suffering from mental disorders.

The Rand Study was undertaken for the California Community Foundation, which has funded other programs for returning veterans. Lieutenant General Eric Schoomaker, the Army surgeon general, said the study would help draw the nation's attention. "They are making this a national debate," Schoomaker said.

The Army previously has said that an estimated 1 in 6 service members suffers from a form of post-traumatic stress disorder, or PTSD, a slightly lower rate than Rand's study found. In addition to PTSD rates, the Rand study found that 19.5 percent of people who had served in Iraq or Afghanistan suffered a concussion or another traumatic brain injury during their combat tour, a number similar to Army estimates.

Taken together, the study shows that 31 percent of those who have served in combat have suffered brain injuries, stress disorders, or both.

Combat-related mental ailments and stress can lead to suicide, homelessness and physical health problems. But more mundane disorders can have long-term social consequences.

"These conditions can impair relationships, disrupt marriages, aggravate the difficulties of parenting, and cause problems in children that may extend the consequences of combat trauma across generations," the study says.

Failure to treat disorders adequately can cost the government billions of dollars, said Lisa H. Jaycox, another of the study's authors.

Some service members avoid a diagnosis of a mental health problem, fearing negative consequences, according to the study. These troops worry about damage to their military careers and relationships with co-workers. "When we asked folks what was limiting them from getting the help that they need, among the top barriers that were reported were really negative career repercussions," said Terri Tanielian, one of the study's authors.

The study suggests two key changes. It suggests ways to allow service members to get mental health care "off the record" to avoid any stigma. And since some soldiers and Marines fear that seeking treatment will prevent their redeployment, the study recommends that fitness-for-duty reports not rely on decisions to seek mental health care.