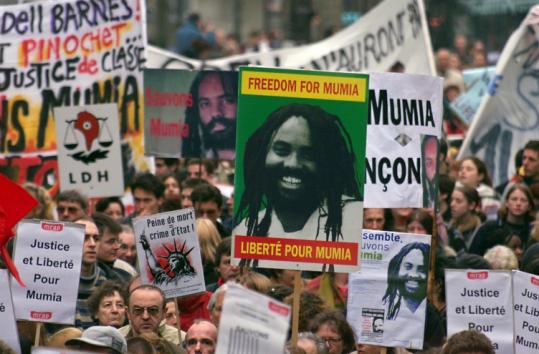 About 2,000 demonstrators supported Mumia Abu-Jamal in Paris in 2000. An appeals court has ruled that he should get a new sentencing hearing because of flawed jury instructions. (OLIVIER MORIN/AFP/Getty Images/File)
Email|Print|Single Page| Text size – + By David G. Savage Los Angeles Times / March 28, 2008

WASHINGTON - Convicted cop killer Mumia Abu-Jamal, whose case has been an international cause célèbre, had his death sentence overturned by a US appeals court in Philadelphia yesterday, but his bid for a new trial was rejected.

The 25-year legal battle over Abu-Jamal's fate showed no sign of ending, however, since both the prosecutor and defense said they saw grounds for appealing.

"We will not consider making a deal. That is not on the table," said Robert R. Bryan, a San Francisco defense lawyer for Abu-Jamal. "We want an entirely new trial."

Yesterday's decision upheld a lower court ruling that overturned the death sentence in 2001.

Prosecutors say nothing about the case has changed in a quarter century. On Dec. 9, 1981, Abu-Jamal shot Officer Daniel Faulkner shortly after he stopped William Cook, Abu-Jamal's brother, on a Philadelphia street.

Abu-Jamal was arrested at the scene, and a revolver he had purchased two years earlier was found next to him. A jury of 10 whites and two blacks convicted him of first-degree murder in 1982 and voted unanimously to impose a death sentence.

Since then, his case has gone through a series of appeals in the state and federal courts. Abu-Jamal's case has been championed by a legion of activists who say his trial was stained by racism.

His lawyers in his latest appeal hoped the judges would overturn his conviction on the grounds that prosecutors had wrongly excluded several blacks from the jury.

His claim was bolstered by recent decisions of the US Supreme Court that overturned death sentences in Texas and Louisiana in which an all-white jury convicted a black defendant.

The appeals court, in a 2-1 decision, disagreed, however. Its judges noted that Abu-Jamal's trial lawyers did not object at the time to the seating of the jury.

But his lawyers won a reversal of the death sentence on the grounds that jurors might have been confused by one aspect of the jury instructions. They were told they could weigh "any mitigating circumstances" as reason to spare his life.

But the judges worried that jurors may have thought that all 12 of them had to agree on a particular mitigating circumstance. For example, jurors were told that Abu-Jamal had significant prior criminal record and that he had been a journalist and activist.

The Supreme Court had overturned a death sentence in a 1988 case from Maryland because of the possibility jurors were confused on this point. Applying that logic to this case, the judges said there was "a reasonable likelihood" the jurors believed they all had to agree on a mitigating factor before they could use it to spare Abu-Jamal's life.