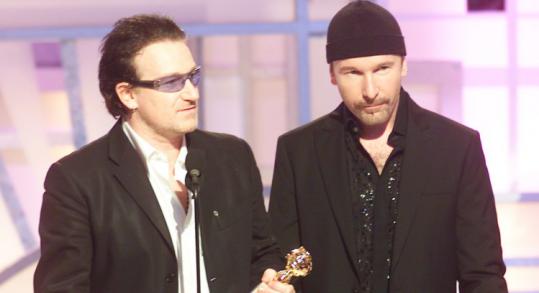 WASHINGTON - The Supreme Court this week may reopen for the first time in more than 30 years the debate over what qualifies as an "indecent" broadcast.

The media environment has changed dramatically since the court last ruled on this issue in 1978: Viewers and listeners today are exposed to the more freewheeling cable television, Internet, and "shock jocks" on satellite radio.

The issue before the court now is delicately described as the problem of "fleeting expletives" in over-the-air broadcasts, which are still regulated. Television viewers who watch some of the entertainment industry's award shows may be familiar with the phenomenon.

Rock singer Bono uttered an expletive on a live NBC show when accepting a Golden Globe Award in 2003 for best original song. So did Cher after receiving a Billboard Music Award for career achievement on Fox TV a year earlier.

After receiving complaints from angry viewers, the Federal Communications Commission moved to crack down on broadcasters who air "isolated or fleeting expletives" during daytime and early-evening hours.

Last year, Fox and the other networks sued to block the new policy and an appeals court in New York put it on hold.

Now, the FCC is asking the Supreme Court to clear the way so the new crackdown can be enforced. The justices may act on the agency's appeal as soon as today. If they vote to hear the case, arguments would be heard in the fall.

The appellate judges in New York who blocked the new policy said it was arbitrary and vague. It does not, for example, say that all expletives will trigger fines from the FCC regardless of the circumstances.

News program and movies such as "Saving Private Ryan" were given exemptions. Including profanity from soldiers on the D-day beaches was not intended to shock or titillate but conveyed the horror of war, the FCC said.

At the same time, the appellate judges hinted that a true ban on all broadcast expletives would violate the First Amendment's free speech guarantee.

Solicitor General Paul D. Clement asked the Supreme Court to intervene and to revive the FCC's new rule. Unless the court acts, he said, the television industry will have compete freedom to air expletives during the hours children and families are watching.

If the justices do take on this dispute, they will be obliged to ponder the many meanings of vulgar words. Federal law itself does not provide much guidance. It forbids the broadcasting of "any obscene, indecent, or profane language." Congress has left it to the FCC to decide what that means.

In 1978, the court agreed with the FCC that comedian George Carlin's "seven dirty words" monologue, when broadcast on the radio at midafternoon, was indecent. But the 5-to-4 decision was narrow.

Afterward, the FCC adopted this distinction. It described "indecency" as words or pictures that focus on "sexual or excretory organs" and "dwell on or repeat at length" the descriptions. That rule seemed to leave a loophole for the occasional vulgar word that slipped into a broadcast.

The FCC changed course after it was flooded with complaints from grass-root groups after the vulgarities on the Hollywood awards shows.

Broadcasters say they have no desire to air expletives. They are simply trying to make sure that when an unscripted expletive is used it does not result in a large fine.