Southern Baptists are diversifying to survive

Denomination once hostile to black progress 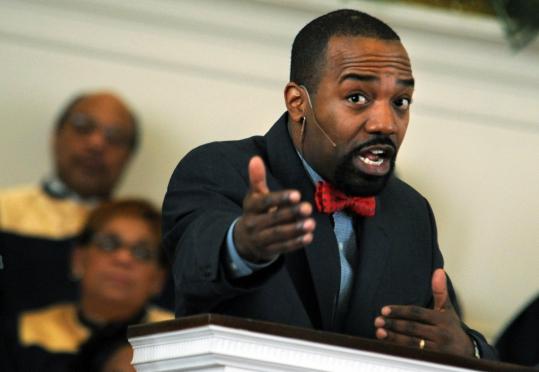 Now, the young Temple Hills, Md., minister is the highest-ranking African-American in the 16 million-member denomination and a representative of the changing times confronting Southern Baptists and other mostly white Protestant denominations.

Faced with aging and departing members, the nation's largest non-Catholic Christian bodies - Southern Baptists, United Methodists, Lutherans, and Presbyterians - are reaching out to minorities in ways they never have before.

Yet, while local churches often remain predominantly black or white, the outreach does result in a more diverse national organization.

By establishing churches in minority communities, changing worship practices, electing minorities to leadership positions, and purging racism from their language and attitudes, the faiths are seeking to draw in communities of color as a way to boost stagnating or falling membership.

The consequences of ignoring those communities, they warn, are dire.

"You can almost calculate the time when we close the door and turn off the lights if we don't become a more diverse church," said Sherman Hicks, executive director of multicultural ministries for the Evangelical Lutheran Church in America, a 4.9 million-member denomination that is 97 percent white.

But of all the denominations seeking to diversify, many agree that the Southern Baptist Convention - an association of about 40,000 congregations that make up the nation's largest Protestant denomination - has the farthest to travel.

From its 1845 birth in Georgia as a haven for white Baptists who supported slavery, the convention has had troubled relations with African-Americans.

For 150 years, by its own admission, it was hostile to black progress, often speaking in favor of Jim Crow laws.

But in 1995, the Southern Baptists did an about-face, issuing a public apology for their history of bigotry and vowing to "eradicate racism in all its forms" from its ranks.

These days, the faith that was once proudly white now touts the fact that almost 20 percent of its congregations are predominantly black, Latino, or Asian. Hundreds of minorities serve in leadership posts in its state conventions, seminaries, and other organizations.

The convention's Mission Board estimates that the number of black members has doubled to about 1 million since the 1995 apology.

Southern Baptists are starting churches in black communities and, while they insist they don't recruit from predominantly black denominations, the outreach strategy includes welcoming black preachers from those bodies and offering them multiday "boot camps" - intensive teaching in starting Southern Baptist churches.

"I wish it was all just spiritual, but some of it is pragmatic as well," said the Rev. Frank Page, president of the Southern Baptist Convention. "Our highest growth is coming in ethnic congregations, so it's very important for the growth of our convention . . . If we're going to reach our nation, we're going to need to reach ethnic groups."

The convention encourages new pastors to network with other black Southern Baptist leaders, offering them names and contact information. A recent publication details African-Americans' involvement in the convention since its founding, although it omits any mention of past racism and the 1995 apology.

From an average of 250 worshipers before Redmond came, Hillcrest Baptist Church now draws an average of 375 worshipers on Sundays. The nursery school, which had a handful of children a few years ago, is up to 30 children.

Redmond, 40, and other black Southern Baptists say they are pushing the denomination to address issues of concern to African-Americans, such as the plight of poor, urban Americans, out-of-wedlock births, civil rights, and racial injustice.

"The most important thing for the Southern Baptist Convention to do socially is to attempt to move away from addressing only upper-middle class, conservative issues," said Redmond. "We have to stop thinking of ourselves as trying to hedge a June Cleaverish class of Christianity."

Since coming to Hillcrest, Redmond has revamped the worship style to add African-American church traditions. Redmond said there was "dead silence" when he preached, and hymns were sung only to piano or organ.

But now services at Hillcrest, a tall, steepled church surrounded by modest brick ranch homes, are a mix of worship traditions. They include such staid Baptist hymns as "What a Friend We Have in Jesus," as well as a swaying, clapping choir, accompanied by drums and electric keyboards, and worshipers who call out "amen," "mmm-hmm" and "preach, pastor" to his sermons.

"We had to make changes that were appropriate for reaching a contemporary African-American culture," he said. "People are free to express themselves - to cry aloud, to clap, and to have other emotions displayed in the service."

But despite Redmond's enthusiasm, skeptics say it will take more than gospel singing and dynamic young preachers to make Southern Baptists more diverse.