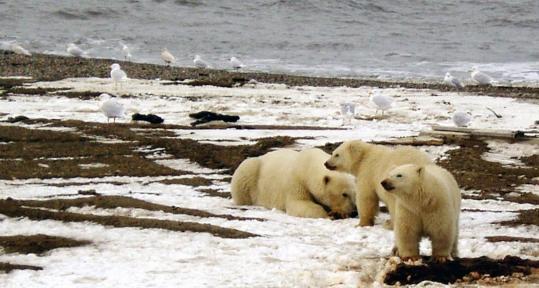 A polar bear sow and two cubs on the Beaufort Sea coast within the Arctic National Wildlife Refuge. Environmentalists say the bears are in danger of extinction because of climate change. (US Fish and Wildlife Service via Reuters)
Email|Print| Text size – + By Deborah Zabarenko Reuters / February 14, 2008

WASHINGTON - The federal government has missed its own postponed deadline to decide whether polar bears need protection from climate change, and critics link the delay to an oil lease sale in a vast swath of the bear's icy habitat.

"When it comes to the survival of the polar bear, the Bush administration is putting the 'dead' back into 'deadline,' " said Representative Edward J. Markey, a Massachusetts Democrat who heads a House panel on climate change.

"Now that the Bush administration has taken care of its clear first priority - taking care of their friends in the oil industry - perhaps they can finally give the polar bear, and the global warming that is causing the bear's demise, the attention it is due," Markey said in a statement.

Polar bears use sea ice as a platform for hunting seals, their main prey, and without enough ice, they are forced onto land, where they are inefficient hunters. Warmer arctic waters mean longer distances between chunks of sea ice, and video footage of drowning polar bears has fueled debate over their future.

The US Geological Survey, in a study conducted to aid the government's decision, reported last year that all the polar bears in Alaska - about 16,000 currently - could disappear if warming trends continue.

The Interior Department's Fish and Wildlife Service was required by statute to decide by Jan. 9 whether the polar bear should be listed as threatened under the Endangered Species Act, but three days before that, the agency's chief told reporters the deadline would be pushed back 30 days. The second deadline passed, on Feb. 8, with no decision.

On Feb. 6, the Interior Department's Minerals Management Service sold oil and gas rights across some 29.7 million acres in the Chukchi Sea off the Alaskan coast for a record $2.66 billion - about four times what the government expected to get.

Protesters, including one in a polar bear suit, demonstrated outside the auction in Anchorage.

Chris Tollefson, a spokesman for the Fish and Wildlife Service, said the timing of the two events was "entirely coincidental."

"These two things have moved on somewhat parallel tracks, but really the driver in all of this has been the complexity of the issues and the science," Tollefson said yesterday by telephone.

He said a decision was expected "sooner rather than later" but declined to be more specific.

Environmental groups have notified the government they plan to sue if no decision is reached 60 days after the original January deadline.

"If the Fish and Wildlife Service had protected polar bears before the lease sales were finalized, there would have been additional legal safeguards to the polar bears," said Andrew Wetzler, an attorney and endangered species specialist at the Natural Resources Defense Council, a potential plaintiff.

"The illegal failure to protect polar bears under the Endangered Species Act gave the Minerals Management Service a pass," Wetzler said in a telephone interview.

He dismissed contentions that another law, the Marine Mammals Protection Act, offers comparable safeguards. This other law does not require the same kind of consultation that the Endangered Species Act does, lacks protections for critical habitat, and does not include plans for recovery, Wetzler said.

He doubted, however, that the Bush administration was trying to "run out the clock" so the polar bear problem lands on the next president's desk.

"The Bush administration actually did the right thing: They formally proposed listing the polar bear as a threatened species under the Endangered Species Act," Wetzler said.

"There's no reason for them not to finalize that decision now."