Mukasey is pressed on waterboarding 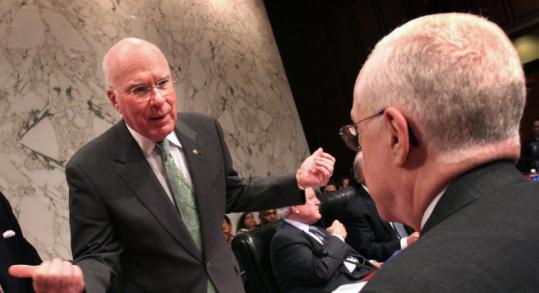 WASHINGTON - Senate Democrats pounced yesterday on Attorney General Michael Mukasey's refusal to declare waterboarding illegal, accusing him of potentially allowing the harsh interrogation tactic to be used in the future.

Mukasey, in his third month at the helm of the Justice Department, said he would feel tortured if he were waterboarded. But he staunchly avoided debating whether waterboarding is legal during a Senate Judiciary Committee hearing. Instead, he echoed the Bush administration's long-standing denial of identifying how Al Qaeda detainees have been questioned by CIA interrogators.

Waterboarding involves strapping a person down and pouring water over his or her cloth-covered face to create the sensation of drowning.

"Would waterboarding be torture if it was done to you?" asked Senator Edward M. Kennedy, Democrat of Massachusetts.

"I would feel that it was," Mukasey said.

Under further questioning later, however, Mukasey did not rule out the possible need for waterboarding terror suspects in order to save American lives.

"What about the circumstances where the information would save lives, many lives?" asked Senator Dick Durbin, Democrat of Illinois. "Would that justify it?"

"Those circumstances have not been set out," Mukasey answered. "That is not part of the program. We don't know concretely what they are. And we don't know how that would work."

Mukasey added: "It is unresolved, because I have not been presented with a concrete situation."

For the most part, Mukasey appeared unruffled by Democrats who grew increasingly exasperated with his hedging. The most emotion he showed throughout the five-hour hearing was tapping his fingers on his legal pad of paper to make a point to Durbin.

As he promised the Senate panel last fall he would do, Mukasey said he has reviewed Justice Department memos about the CIA's interrogation program and concluded that the spy agency doesn't currently engage in waterboarding.

Beyond that, Mukasey said he would not discuss the legality of the classified program for fear of tipping off US enemies about interrogation methods.

"I'm not get into any discussion, in the abstract, of circumstances in which it might be," Mukasey said.

The Pentagon and the CIA both internally prohibited waterboarding in 2006. Intelligence officials privately acknowledge, however, that at least three Al Qaeda suspects were waterboarded by US interrogators in the years following the Sept. 11, 2001, terror attacks.

"I think it's been an embarrassment to our nation from a lot of these hearings when we've suggested wide-scale abuse that is not true," said Sessions, coming to Mukasey's defense.

As the government's top law enforcement officer, Mukasey could potentially expose the Bush administration and its employees to criminal or civil charges or even international war crimes if he declares waterboarding illegal.

He also said Congress was partially to blame for failing to explicitly prohibit waterboarding by name as part of the 2006 Military Commissions Act. Senators from both parties, however, have said waterboarding is among the banned treatment of terror suspects that is described as "cruel, inhuman, and degrading."

Elisa Massimino, Washington director of Human Rights First, said Mukasey's testimony left open the door for interrogators to waterboard in the future - even if the CIA does not do so today.

"He acknowledged that tomorrow all that could change," Massimino said. "The attorney general's evasive testimony today makes it impossible for the American people or the world to know what the United States means when it says that it does not torture."

Despite the emotional topic, yesterday's hearing created little drama and drew none of the political fireworks that marked Mukasey's confirmation hearings in October or appearances last year by his predecessor, Alberto Gonzales.

Waterboarding dominated the hearing, but senators also peppered Mukasey with questions about laws to spy on terror suspects; closing the US detention center in Guantanamo Bay, Cuba; a media shield law to protect reporters from naming their sources; and a host of other topics. In nearly every case, he sided with the Bush administration's position.

"I was hoping to see a little more evidence of independent judgment," said Senator Russ Feingold, Democrat of Wisconsin. "But perhaps we're going to see that in the future."