On their own, Md. pair treated scores of civilians 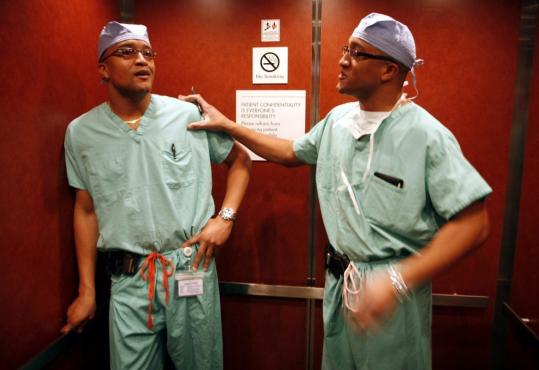 WASHINGTON - The jet they had leased at their own expense and filled with medical supplies taxied to a stop at Kabul International Airport. On the runway, not 50 yards away, Vance Moss saw black smoke from the charred shell of a burning plane billowing into a blue sky.

He turned to his twin brother, Vince, who was just stirring from a nap. "Welcome to Afghanistan," he said. Later, Vance silently said a prayer: Please let us accomplish this.

The doctors, natives of Prince George's County in Maryland, had decided in late 2005 to go on their own to treat civilians in the war-torn country.

As members of the US Army Reserve, they initially sought help from the military and the State Department but found no interest. So they worked connections until they found a military officer and an Afghan doctor willing to set them up.

They secured their visas, purchased medical supplies, found a translator, hired a jet, and said goodbye to family and friends.

Two trips and hundreds of patients later, the 36-year-old doctors were honored yesterday for their humanitarian efforts.

The Mosses were among the recipients of the 2008 Trumpet Awards, which were presented at a ceremony in Atlanta. The awards, which recognize achievements by blacks, were also given to actors Danny Glover and Halle Berry. Past honorees include Sidney Poitier, Coretta Scott King, and Rosa Parks.

By the end of the month, the twins will head to Iraq with their reserve unit to treat wounded troops. In their off time, they want to treat civilians and are negotiating with the State Department for permission.

As they tied up loose ends at Crozer Chester Medical Center near Philadelphia last week, the doctors said they are grateful for the opportunity. "We're ready to do our duty to God and our country," Vance Moss said.

Army reservists since their sophomore year of college, the twins were called to active duty at stateside military hospitals in summer 2005.

As Vince, a cardiothoracic surgeon stationed at Fort Jackson in South Carolina, worked with soldiers who had returned from war zones, he heard their stories about the effects on civilians. "Innocent people were being caught up, injured and were dying because basic medical care was not available to them," he said.

Vance, a urologist, was hearing the same accounts at Fort Bliss in Texas. "But the stories about what was happening in Afghanistan were worse," he said. "The terrain and the culture were more diverse, which led to problems for civilians trying to find medical care."

The brothers began to discuss going over to help.

As Boy Scouts, they had learned an affinity for those less fortunate. They always thought they were put on earth to do something significant, Vince said.

"We had been taught that we could do anything we wanted, but when we started thinking about medicine, we had a guidance counselor at Oxon Hill High School who told us we should think about something else because we'd never be doctors," Vance said.

"After we got into Penn [State], we had an adviser to tell us that we should have a backup plan because it was really tough to get into medical school," Vince said. "All of our lives, people have been trying to limit us, so when we decided we wanted to go to Afghanistan, we were determined to do it."

The Army Reserve said no but did agree to provide some medical equipment, the brothers said.

Then, Colonel Gary Davis, an Army doctor in Afghanistan, set them up with an Afghan physician who helped find the people they would need to move safely through the war-ravaged country, they said.

Soon after they arrived, the brothers knew they were needed. The first day, they worked out of a hut in a remote region near the Pakistani border.

"When we arrived, we saw all of these people lined up," Vince said. "There were dozens and dozens of them. It seemed like hundreds. They had heard we were coming and started lining up early in the morning to be treated."

The rest of their days were much the same. They operated in caves. They operated in bombed-out buildings. Sometimes they were fortunate enough to work at medical facilities, but these were always dirty and never well equipped, the doctors said.

"A lot of the time, we would do surgery using cellphones and flashlights to see because there was no electricity," Vance said.

Surgical instruments were often washed in a basin with soap and water. Scrubbing for surgery could mean no more than vigorously rinsing hands with bottled alcohol.

The brothers said they worried about how they would be received by the people in remote areas who had never seen African-Americans and in some cases had been taught that Americans were the enemy.

But everywhere they went, they were treated as celebrities. "Doganagy! Doganagy! the people would shout.

"We thought it was a greeting, so we said it back to some people," Vance said.

The people laughed, as did their translators. It is the Dari word for "twin."