Measure requires massive increase in use of ethanol 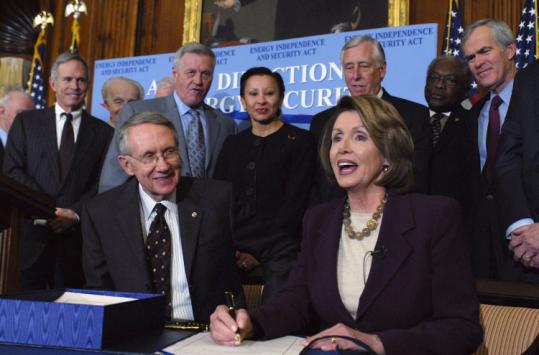 WASHINGTON - A year of rhetoric, lobbying, veto threats, and negotiations ended yesterday as the House of Representatives voted 314 to 100 to pass an energy bill that President Bush is to sign today. The bill will raise fuelefficiency standards for automobiles, order a massive increase in the use of biofuels, and phase out sales of the ubiquitous incandescent light bulb popularized by Thomas Edison more than a century ago.

Lawmakers said the energy bill will reduce, though not eliminate, America's heavy reliance on imported oil and take a modest step toward slowing climate change by cutting about a quarter of the greenhouse gas emissions that most scientists say the United States must eliminate by 2030 to do its share to avert the most dire effects of global warming.

"It is a national security issue, it is an economic issue, it is an environmental issue, and therefore a health issue," said House Speaker Nancy Pelosi, Democrat of California. Dana Perino, White House press secretary, credited Bush, saying he "pushed Congress to pass this legislation all year." But congressional Democrats said they had withstood veto threats from Bush as well as heavy lobbying by automakers and coal companies before ultimately preserving much, though not all of what they wanted in the legislation.

The bill's centerpiece is the boost in the minimum fuel-efficiency standard for passenger vehicles, the first to be passed by Congress since 1975. It requires new auto fleets to average 35 miles a gallon by 2020, a 40 percent increase from today's 25 miles-a-gallon average.

By 2020, the measure could trim US oil use by 1.1 million barrels a day, more than half the oil exported by Kuwait or Venezuela and equivalent to taking 28 million of today's vehicles off the road.

For farmers and agribusiness, the energy bill is a windfall, perhaps providing more support than the farm bill. It doubles the use of corn-based ethanol - despite criticism that corn-based ethanol is driving up food prices, draining aquifers, and exacerbating fertilizer runoff that is creating dead zones in many of the nation's rivers.

One portion of the bill sets new efficiency standards for appliances and will make the incandescent light bulb - invented two centuries ago and improved and commercialized by Edison in the 1880s - virtually extinct by the middle of the next decade. Starting in 2012, the bill will phase out conventional 100-watt bulbs, ultimately ceding the lighting market to more efficient compact fluorescent bulbs and light-emitting diodes.

The commercial building industry could also be transformed by new incentives for energy-efficient windows, equipment, and design. The federal government is supposed to make all of its buildings carbon-neutral through energy efficiency and clean-energy use by 2030.

"The General Services Administration is the country's biggest landlord," said Andrew Goldberg, chief lobbyist for the American Institute of Architects. "This will help transform the marketplace for systems and equipment that make buildings more energy efficient and reduce the reliance on fossil fuel."

Not everyone was happy with the result of a year of haggling and lobbying. To secure passage of the bill, congressional leaders dropped a tax package that would have reduced tax breaks for the biggest oil and gas companies and extended tax breaks for wind and solar projects.

"We're pretty disappointed," said Rhone Resch, president of the Solar Energy Industries Association, which sought an extension of the investment tax credit that expires at the end of next year.

"Clearly the most important provisions for us were left on the cutting-room floor," Resch said.

Because of long lead times for big solar projects, "we will see the US market for solar start to shrink rapidly by the second quarter of next year," Resch said.

But many environmental groups and lawmakers were still elated. "This bill is a clean break with the failed energy policies of the past and puts us on the path toward a cleaner, greener energy future," said Carl Pope, director of the Sierra Club.

Representative Edward Markey, Democrat of Massachusetts, who had proposed raising fuel-efficiency standards in 2001, 2003, and 2005, said the energy bill would help the United States escape the "vicious whirlpool of imported oil, exported dollars, and military obligations all spinning out of control."