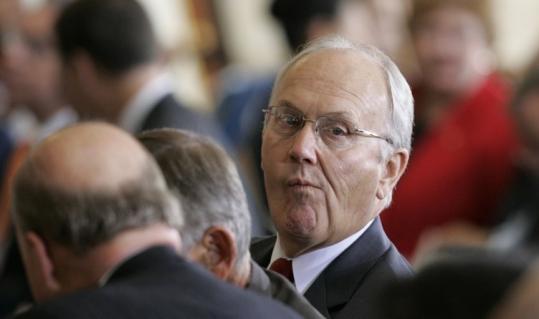 Senator Larry Craig, in the Capitol earlier this fall, blasted the newspaper story in which men said they had sex with him. (larry downing/reuters)
Email|Print| Text size – + By Paul Kane Washington Post / December 5, 2007

WASHINGTON - On Labor Day weekend, Senator Larry E. Craig told the nation that he would resign within weeks because of the uproar over his arrest in a sex sting in an airport men's room. To stay and fight, the Idaho Republican said in a news conference carried live by cable news channels, would be "an unwanted and unfair distraction" from his work as a senator and his responsibilities to his colleagues.

This week, three months later, Craig returns to Congress following the most lurid allegations about his conduct to date, vowing yet again to finish out his term, having long since abandoned his promise to step down quietly for the good of his constituents and his party.

Far from hiding in disgrace, Craig carries on with his odd new normal: After dodging television cameras in the early days of the scandal, he now quietly attends political fund-raisers, meets with Cabinet nominees, and attends to constituents.

Craig will, in fact, end his week on Capitol Hill tomorrow by casting his secret ballot in GOP caucus leadership elections - contests that can be decided by a single vote - then take off on a military jet to Bali, Indonesia, at taxpayer expense, part of a congressional delegation to a United Nations summit on global warming.

This stay-the-course approach is occurring as Craig battles detailed allegations of homosexual acts that conflict with his adamant statement that he is "not gay," made in August after news broke of his arrest in a sting conducted after complaints of lewd behavior in a Minneapolis airport restroom. Craig pleaded guilty to a misdemeanor charge of disorderly conduct.

On Sunday the Idaho Statesman reported in considerable detail the claims of two men who said they had sex with Craig and two who said he made passes at them.

Craig, who is married, said the report had no "basis in reality" and accused the paper of engaging in "tabloid journalism" by running a story that was not corroborated.

"The matter's before the Ethics Committee, and we'll see what they think is appropriate," Senator Mitch McConnell said Monday. The Kentucky Republican, who is minority leader in the Senate, declined to comment further.

Craig still faces a preliminary inquiry into his guilty plea by the Senate Ethics Committee, according to Natalie Ravitz, a spokeswoman for Senator Barbara Boxer, the California Democrat who chairs the panel. The probe could drag on for months.