31-year-old prohibition is challenged; Decision could play in '08 race 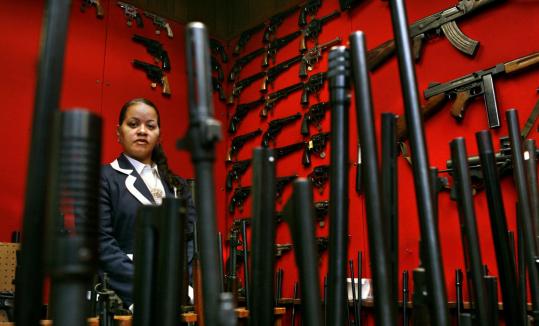 WASHINGTON - The Supreme Court announced yesterday that it would decide whether the Constitution grants individuals the right to keep guns in their homes for private use, plunging the justices into a divisive and long-running debate over how to interpret the Second Amendment's guarantee of the "right of the people to keep and bear arms."

The court accepted a case on the District of Columbia's 31-year-old prohibition on the ownership of handguns. In adding the case to its calendar, for argument in March with a decision possibly in June, the court not only raised the temperature of its current term, but also inevitably injected the issue of gun control into the presidential campaign.

The federal appeals court here, breaking with the great majority of federal courts to have examined the issue over the decades, ruled last March that the Second Amendment right was an individual one, not tied to service in a militia, and that the District of Columbia's categorical ban on handguns was unconstitutional.

Both the District of Columbia government and the winning plaintiff, Dick Anthony Heller, a security officer, urged the justices to review the decision. Heller, who carries a gun while on duty guarding the federal building that houses the administrative offices of the federal court system, wants to keep his gun at home for self defense.

Heller was one of six plaintiffs recruited by a wealthy libertarian lawyer, Robert A. Levy, who created and financed the lawsuit for the purpose of getting a Second Amendment case before the Supreme Court. The appeals court threw out the other five plaintiffs for lack of standing; only Heller had actually applied for permission to keep a gun at home and been turned down.

The Supreme Court last looked at the Second Amendment nearly 70 years ago in United States v. Miller, a 1939 decision that suggested, without explicitly deciding, that the right should be understood in connection with service in a militia. The Second Amendment provides: "A well regulated Militia, being necessary to the security of a free State, the right of the people to keep and bear Arms, shall not be infringed."

The justices chose their own wording for what they want to decide in the new case, District of Columbia v. Heller, No. 07-290. The question they posed is whether the provisions of the statute "violate the Second Amendment rights of individuals who are not affiliated with any state-regulated militia, but who wish to keep handguns and other firearms for private use in their homes."

The court's choice of words is almost never inadvertent, and its use of the phrase "state-regulated militia" was somewhat curious. The District of Columbia, of course, is not a state, and one of the arguments its lawyers are making in their appeal is that the Second Amendment simply does not apply to "legislation enacted exclusively for the District of Columbia."

For that matter, the Supreme Court has never ruled that the Second Amendment even applies to the states, as opposed to the federal government. The court has applied nearly all the other provisions of the Bill of Rights to the states, leaving the Second Amendment as the most prominent exception. The justices evidently decided that this case was not the proper vehicle for exploring that issue, because as a non-state, the District of Columbia is not in a position to argue it one way or another.

Because none of the justices now on the court have ever confronted a Second Amendment case, any prediction about how the court will rule is little more than pure speculation.

Of the hundreds of gun regulations on the books in states and localities around the country, the District of Columbia law is generally regarded as the strictest.

Chicago comes the closest, banning the possession of handguns acquired since 1983 and requiring re-registration of older guns every two years. New York City permits handgun ownership with a permit issued by the Police Department.

The District of Columbia law not only bans ownership of handguns, but requires other guns that may be legally kept in the home, rifles and shotguns, to be disassembled or kept under a trigger lock. The capital's newly empowered City Council enacted the law in 1976 as one of its first measures after receiving home-rule authority from Congress.

The court's announcement yesterday indicated that it would review the handgun ban in light of the provision that permits, with restrictions, the other guns.

The opposing sides in the lawsuit presented very different views of how the various provisions interact.

To the plaintiffs, the restrictions on the conditions under which rifles and shotguns may be kept means that homeowners are denied the right to possess "functional" weapons for self defense. To the District of Columbia, the fact that these other guns are permitted shows that the law is nuanced and sensitive to gun owners' needs. It takes about one minute to disengage a trigger lock.

In any event, a Supreme Court decision that finds the District of Columbia law unconstitutional would not necessarily invalidate other, more modest restrictions, like those that permit handgun ownership for those who pass a background check and obtain a license. Since the only claim in the case is that law-abiding people have the right to keep a gun at home, the court will not have occasion to address restrictions on carrying guns.

In fact, lawyers on both sides of the case agreed Tuesday that a victory for the plaintiff in this case would amount to the opening chapter in an examination of the constitutionality of gun control rather than anything close to the final word.

"This is just the beginning," said Alan Gura, the lead counsel for the plaintiff. He said in an interview that "gun laws that make sense," like those requiring background checks, would survive the legal attack, which he said was limited to "laws that do no good other than disarm law-abiding citizens."

Whether the handgun ban has reduced crime in a city surrounded by less-restrictive jurisdictions is a matter of dispute. Crime in the District of Columbia has mirrored trends in the rest of the country, dropping quite sharply during the 1990s but now experiencing some increase.

Dennis A. Henigan, a lawyer at the Brady Center to Prevent Gun Violence, which advocates strict gun control, said that if the justices agree with the appeals court, an important question for future cases will be "what legal standard the court will eventually adopt for evaluating other gun regulations."