A staunch conservative built on self-reliance 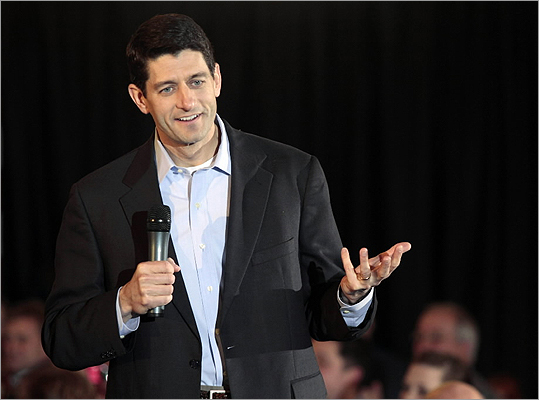 It was around 1990 when Paul Ryan walked into Laws Hall at Miami University of Ohio and took his seat in an economics class taught by a conservative free-market advocate named William R. Hart. Ryan rarely had questions about the class material. Instead, he would pepper Hart afterwards with deeper questions about the financial and political forces that shape the world.

“Most of our conversations would be about political philosophy,” Hart said in a telephone interview Saturday, recalling Ryan’s early passion for the views of writer Ayn Rand and economist Milton Friedman. Ryan embraced Hart’s conservative views as well, and, before long, asked for a recommendation to intern with a Republican senator from Wisconsin.

From there, it was a rise so swift and steady it almost seems scripted: congressional aide, elected to the US House at 28 years old, House Budget Committee chairman, prominent intellect of the GOP, proponent of a controversial plan to cut the deficit and, on Saturday, at just 42 years old, named by Mitt Romney as the prospective vice presidential candidate.

But unlike Romney, whose family background helped groom him to be a presidential candidate, Ryan’s path to this moment was hardly pre­ordained.

That he shared the stage with Romney on Saturday — and could serve with him in the White House — would have seemed unlikely to those who knew him as an earnest, fatherless teenager. At best, it was thought he would one day use his obvious intellect to become an economics wonk.

The defining moment of Ryan’s life came early. He had grown up in Janesville, Wis., a city of 63,000 in the state’s southern tier.

One day, at 16 years old, he tried to wake his father, only to realize that he had died from a heart attack. His grandmother, who had Alzheimer’s disease, moved in.

Such difficulties only reinforced Ryan’s belief in self-reliance. He had inherited some of his thinking from Patrick W. Ryan, his crusty great-grandfather, who in 1884 founded a Wisconsin construction company that initially relied on a pack of mules, eventually helped build Chicago’s O’Hare airport, and continues to be run by the family.

Ryan’s greatest influence, he said years later, was Rand, author of the novels, “The Fountainhead” and “Atlas Shrugged.” While he is a committed anti-abortion Catholic and rejects Rand’s atheism, support for abortion rights, and her views on anarchy, he embraces her thinking about what he calls the “fight of individualism versus collectivism.”

Returning to Washington after his internship, he moved to Capitol Hill, living in a $400-per-month basement apartment and working as an aide on a Senate small business committee.

Ryan eventually got a job at group called Empower America, headed by two of the leading conservative thinkers at the time, former Secretary of Housing and Urban Development Jack Kemp, who hired Ryan, and former Secretary of Education William Bennett. The group described itself as working to ensure that “government actions foster growth, economic well-being, freedom, and individual responsibility.”

Ryan and Bennett shared a passion for hiking and they headed to the Colorado Rockies, discussing politics on the trail. Later, after Ryan had served as legislative director for Senator Sam Brownback of Kansas, Bennett encouraged Ryan’s ambition of running for Congress.

“I always knew there was a great sense of personal responsibility, and I could see a tremendous sense of personality,” Bennett said Saturday, adding that he couldn’t have predicted Ryan’s rise to stardom.

So, at just 28, Ryan returned to his hometown and sought election to the US House. The district, dotted with dairy farms, lakes, and industrial plants, embraced him. Ryan won election in 1998 with 57 percent of the vote and has been easily reelected ever since.

Ryan, who lists his net worth as between $927,100 and $3,207,000, arrived in Congress as a disciple of supply-side Republican theology, the youngest in his incoming class.

“He was certainly cordial enough. The demeanor masks just how conservative he really is,” recalled Representative Richard Neal, a Springfield Democrat who sits on the Ways and Means Committee with Ryan. “You could tell he had a game plan.”

That plan soon became clear, as Ryan’s stature rose among fiscal conservatives. In 2005, he proposed allowing some Social Security funds to be invested in private accounts, but it ultimately failed.

Undeterred, Ryan drafted a plan to transform Medicaid into a block-grant program and Medicare into a voucher system. He argued for making the George W. Bush-era tax cuts permanent.

Then, in 2010, fueled by Tea Party victories across the country, Republicans regained control of the House, and Ryan ascended to chair the Budget Committee — a prominent platform from which to attack government spending and entitlement programs.

He sought to sway high-profile conservatives beyond Capitol Hill, including the Heritage Foundation, an influential think tank.

Earlier this year, he introduced the latest version of his plan to shift Medicaid to the states, revamp Medicare, and dramatically cut spending.

In March, the House passed the Ryan budget plan 228-191, mostly along party lines. The Senate refused to go along, and Obama would not have signed it into law in any case.

The Ryan blueprint became another flashpoint in the congressional debate over government spending and deficits.

Obama characterized the Ryan budget as “thinly veiled social Darwinism,” provoking an angry rebuke from Ryan, who charged the president with refusing “to take responsibility for the economy.”

Romney, who earlier this year called the Ryan plan “marvelous,” has doubled down on the proposal by picking Ryan as his running mate, prompting Democrats to revive their arguments against it — and Ryan.

“He looks amiable, and is amiable, but he’s an economic extremist,” said Representative Barney Frank, a Newton Democrat. Representative Chris Van Hollen of Maryland,the ranking Democrat on the Budget Committee, said, “When the country focuses on his budget plan, they’re not going to like what they see.”

But Romney was aglow about his choice.

“Paul Ryan has become an intellectual leader of the Republican Party,” Romney said Saturday. “He understands the fiscal challenges facing America: our exploding deficits and crushing debt — and the fiscal catastrophe that awaits us if we don’t change course.”