‘Likability’ scores are hurdle for Romney 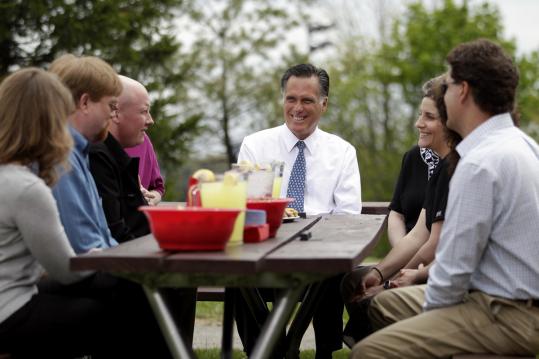 WASHINGTON - Mitt Romney is a self-styled numbers guy. But the likely GOP nominee for president faces a set of numbers any management genius would find daunting: ballooning poll figures suggesting voters don’t much like him.

Running for president is more than a popularity contest, Republicans counter. And it’s true that the bruising GOP primary is responsible for some of the damage to Romney’s image.

Still, such numbers have become a reliable predictor of election-night victories in every race since at least 1980, when Ronald Reagan made Jimmy Carter a one-term president.

Romney’s overall unfavorable/favorable rating makes him, at this point, the least popular major party nominee since at least 1984, according to a recent Washington Post/ABC News poll.

Forty-seven percent of those polled said they had an unfavorable opinion of Romney, compared with 35 percent who view him favorably. President Obama, by contrast, was viewed favorably by 56 percent, with 40 percent unfavorably disposed.

A similar measure, “likability,’’ also reflects a tough race ahead for Romney. A poll released Monday by CNN revealed that only 27 percent of respondents found him more likable than Obama, compared with 56 percent who found Obama more likable.

“Favorability’’ and “likability’’ ratings can be used to measure qualities that go beyond job performance, into personality.

“I don’t think the Romney campaign is under any delusions that Mitt Romney will become the most likable candidate we’ll ever have,’’ said Mike Dennehy, a top adviser to Senator John McCain’s 2008 presidential campaign. “That’s not the kind of guy and the kind of character he is. He’s a business guy, and business guys aren’t back-slappers.’’

Advisers to Romney - who is mild-mannered and rarely angry on the stump - say it is hard for him to be likable when he was forced into daily mudslingingwith Rick Santorum during the primaries, where the conversation turned to such personal matters as birth control.

Romney’s campaign and its supporters buried Santorum and other rivals under negative ads that helped him win primariesbut soured some voters on the former Massachusetts governor.

“We have some time ahead, seven months in the general election,’’ Romney said recently on Fox News, when asked how he will change his “rich’’ and “out-of-touch’’ image. “People will get to know me better and they’ll get to know [Obama] better as well. . . . But the person I am out of touch with is Barack Obama; I am in touch with the American people.’’

Obama has been faulted for many of his policies, but some who disagree with him tend to like him personally. It is something the Obama campaign has been working hard to exploit. The president in recent weeks talked hoops with sports analyst Clark Kellogg and appeared at a pub on Capitol Hill to raise a Guinness on St. Patrick’s Day.

Meanwhile, the image of Romney as a connivingpolitician unable to relate to ordinary people has seepedinto popular culture. “Saturday Night Live’’ earlier this monthopened its show with a sketch showing Romney trying to win over different groups by pandering to their interests. (In front of the Role Playing Game Association, Romney was shown with a cape and a sword declaring, “I can’t remember a time when ‘Dungeons and Dragons’ wasn’t an important part of my life.’’)

Much of the damage has been the result of awkward Romney statements that allowed foes to cast himas a rich capitalist who likes to fire people, doesn’t care for the poor, and knows about NASCAR only because some friends own the teams. In Wisconsin, he recounted a “humorous’’ story that involved his father shutting a Michigan factory and moving jobs to Wisconsin.

Romney’s supporters say that likability will not be a driving factor in the election - and they are likely to cast Obama, much as McCain did, as someone who may be likable the way many celebrities are but ineffective as the leader of the free world.

“Obama is personally extremely likable, he’s extremely telegenic - he’s the kind of guy you’d probably want to go have a beer with,’’ said Mark Zaccaria, chairman of the Rhode Island Republican Party. “There are plenty of likable people. I mean, I’ve got blood relatives who I love. I would never let them near the Oval Office.’’

But most presidential campaigns over the past several decades have been won by the candidate deemed most likable.

In 1984, Gallup found that Reagan had a 16-point lead over Walter Mondale on the question of likability. George H.W. Bush was considered to be more likable than Michael Dukakis, but less so than Bill Clinton, who defeated him in 1992. President George W. Bush defeated two opponents - Vice President Al Gore and Senator John F. Kerry - who struggled to come across naturally.

After a debate in October 2008, Obama had a daunting lead - 65 percent to 28 percent - over McCain in the likability department, a CNN poll said.

Rather than emphasize his personality, advisers to Romney are running a campaign focusing on the candidate’s competence and managerial skills.

They also say there will be many opportunities to turn around the numbers, pointing to polling on Clinton at a similar period in his presidential bid. In the spring of 1992, before he remade his image by doing things like playing the saxophone on the “Arsenio Hall Show,’’ Clinton’s numbers were not much better than Romney’s.

“In today’s modern world, a profile in People magazine is a hell of a lot more important than what’s in the Washington Post,’’ said Dave Carney, a Republican consultant. “These are things they’re well aware of and I just don’t see it to be the problem that others do. I think there’s plenty of time to talk about his life experiences, things he likes to do, and personal values.’’

The Romney campaign increasingly is using what many consider his best political asset, Ann Romney, as a way to soften his image. Romney’s personal aide, Garrett Jackson, has also been blogging about his experiences traveling with Romney (“the gov’’ likes pancakes).

Many voters have yet to make up their minds. A YouGov/The Economist poll found that about 11 percent of respondents said they like Romney a lot, compared with 34 percent who dislike him - but a significant 24 percent said they had not yet formed a strong opinion of him. In that 24 percent is opportunity.

Forming connections with strangers has never been a strong suit for Romney. When running for Senate in 1994, he approached a woman in Waltham, trying to shake hands. “I know, you haven’t got your makeup on yet,’’ he said (turns out she did have it on, as she informed him).

“Different politicians have different strengths. You look at Bill Clinton and the guy’s likability is off the chart. Just kind of oozes charisma,’’ said Henry Barbour, a Romney supporter and Republican National Committee member from Mississippi. “To some degree that was the deal with Obama. This celebrity, exciting.

“The thing about Romney, he can get the job done,’’ Barbour said. “America has tried likability and celebrity, and it failed.’’

Globe correspondent Callum Borchers contributed to this report. Matt Viser can be reached at maviser@globe.com.