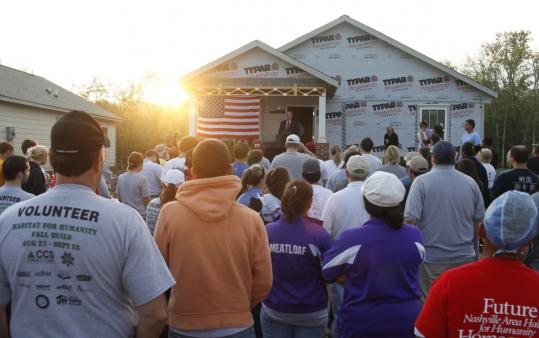 NASHVILLE - Across the nation, Americans built homes, shined firetrucks, cleaned parks, and gave blood on the 10th anniversary of Sept. 11, trying to recapture the good will, can-do spirit that people say they lost in the decade since the attacks.

At dawn yesterday, student Alee Pagnotti joined about 200 other volunteers in a northern Nashville neighborhood to build seven new homes for families.

“This is a good reminder to keep that spirit alive,’’ Pagnotti said.

The National Day of Service and Remembrance was launched in 2002 by family members of Sept. 11 victims. With projects in all 50 states, the goal was to honor the victims and turn the tragic anniversary into something positive. President Obama spent time with his family working at a soup kitchen in Washington on Saturday, encouraging Americans to find ways to serve.

David Paine, president and cofounder of My Good Deed, a nonprofit promoting the day of service, estimated that four in 10 Americans planned to observe the anniversary by volunteering or doing some form of charity.

In the days and weeks after the 2001 attacks, Americans who didn’t live in the places directly affected - New York, Washington, or Shanksville, Pa. - felt impotent. People wanted to help. They stood in line for hours to give blood, although there were few 9/11 victims to give it to, and described feeling united with fellow Americans.

“As unfortunate as it was, it seemed like it put us all back into the frame of mind that life wasn’t just about me,’’ said Yvette Windham, a 44-year-old volunteer from Nashville. “This is the least that we could do.’’

Sam Sommers, a professor of social psychology at Tufts University, said it was easy for Americans to come together after 9/11. Less than a year before, the country seemed fractured by the contentious 2000 presidential election. But the crisis of the terrorist attacks changed that. Years of war, economic crisis, and pessimism, however, have not inspired the same feelings, he said.

“We’re facing threats at home right now, different kinds of threats [that] have done the opposite, that haven’t unified us,’’ he said. 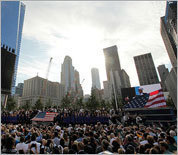