In N.Y., life must go on, even as reminders of attacks remain 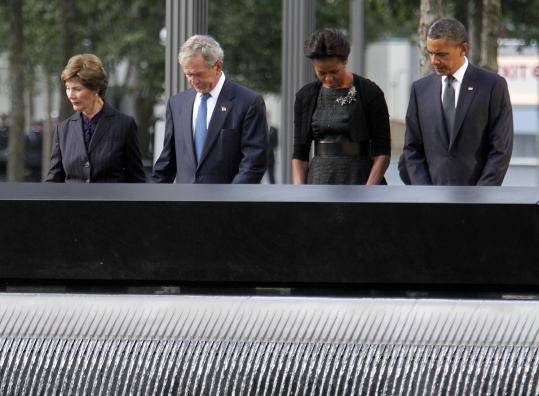 NEW YORK - Mike Hurley stopped by the wall inside the Engine 54 firehouse, where the words “Never Forget’’ are inscribed under the photos of 15 firefighters who rushed to the World Trade Center a decade ago and never returned.

A charred ax used in the rescue effort is enclosed inside a glass case. On a corner of the firehouse at Eighth Avenue and 48th Street, a bronze memorial depicts the horror and heroism of that day. Flowers and flags formed row after row of colorful but somber remembrance.

“Every time you come into work, this is the first thing you see,’’ said Hurley, a 38-year-old firefighter, as he glanced yesterday toward the photos of the fallen from the Midtown firehouse.

Still, Hurley had a smile for his colleagues, a confident purpose in his gait, and the look of someone who won’t forget the past, but also won’t be ruled by it.

In that way, he mirrored the sentiments of many New Yorkers who paused to honor the dead yesterday and recall how that day changed their lives, but refused to alter their daily routines.

“Life still goes on, no matter what,’’ said Patrick O’Doherty, 42, as he worked at a construction job near Times Square.

Tina Salaks, a Manhattan resident who guided patrons toward discount theater tickets, knew two people who died that day - a firefighter and a police officer - and still recalls the smell of smoke that enveloped the island.

“It’s very sad. It’s distressing,’’ Salaks said of the anniversary. “I hope we never see the like of it again.’’

But despite the trauma, Salaks said, New Yorkers remain “a resilient bunch.’’

Osman Niapate, 32, a taxi driver from Mali who is Muslim, said he sees something else, however.

“If you are a Muslim, people have a different regard for you now,’’ Niapate said. Traffic tickets tend to come his way more quickly when officers read his name, he said.

Niapate also sees the trappings of a growing urban fortress, he said, pointing toward surveillance cameras on street corners and gesturing toward police who he said seem far more plentiful than they were a decade ago.

Yet, these measures have also made him more secure, Niapate said.

“I feel very safe,’’ he said. “They take everything seriously, that’s the reason.’’

Safety, even when authorities had warned of a possible terror plot, seemed a given for thousands of tourists who crowded open-deck tour buses yesterday to see the city.

Abdul Ayinla, 49, who hawked for tour-bus customers at Rockefeller Center, said business was only a small fraction off from a typical Sunday in September. His visitors knew the significance of the day, he said, but their business in New York was for pleasure, not memorials.

“They talk about it,’’ Ayinla said of his CitySights NY passengers. “They ask about it, but it‘s not like they’re concerned about it. It just brings back bad memories.’’

The memories also were of heartening unity in the aftermath of the attacks.

Clarence Kay, 86, of Staten Island, spoke of how the city came together then, although he said that spirit has waned in the 10 years since.

“The churches were full after 9/11,’’ Kay said as he walked slowly up Wall Street to services at Trinity Church. Now, he said, “everybody is doing their thing. . . . It will take another disaster to wake everybody up.’’

Nearby, at the World Trade Center site, Andrew Benjamin of Brooklyn also recalled the generosity and camaraderie New Yorkers showed one another after the attack.

“The city is hardly ever close, but that was the day that everyone contributed,’’ Benjamin said. “That was one day we showed we can handle anything that comes.’’

The police presence here was heavier than anywhere else in the city. Packs of officers, many armed with automatic weapons, kept watch on thousands of people who could not attend the memorial but felt compelled to get as close as possible.

Benjamin, 46, wore the reflective vest and hard hat that he took to the scene 10 years ago as a volunteer rescue worker.

“I keep it as a remembrance,’’ Benjamin said. “We take things for granted now.’’

John Moore, a security guard at Rockefeller Center, tries not to think of the attacks. But on a day like yesterday, such a task was impossible. Inside the towering main building, a television in a newsstand replayed coverage of the unfolding tragedy at the burning towers.

Like many New Yorkers yesterday, Moore cited the reminder that anyone who lived in the city, then and now, cannot escape. The gap in the Lower Manhattan skyline, the space where two gleaming towers once stood, is proving difficult to overlook.

Brian MacQuarrie can be reached at bmacquarrie@globe.com.