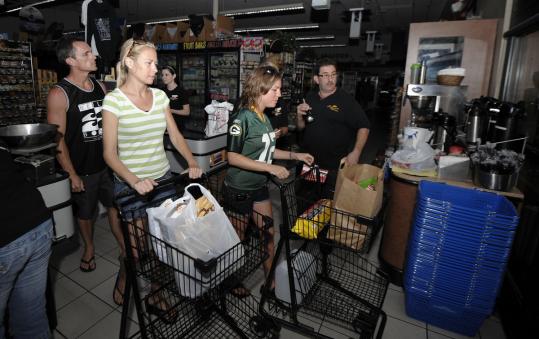 SAN DIEGO - A major power outage knocked out electricity to up to 5 million people in California, Arizona, and Mexico yesterday, bringing San Diego and Tijuana to a standstill and leaving people sweltering in the late-summer heat in the surrounding desert.

Two nuclear reactors were offline after losing electricity, but officials said there was no danger to the public or workers.

San Diego bore the brunt of the blackout; most of the nation’s eighth-largest city was darkened. All outgoing flights from San Diego’s Lindbergh Field were grounded and police stations were using generators to accept emergency calls across the area.

Parts of Orange County regained power in the evening, but officials said most people would remain in the dark through the night.

The outage was probably caused by an employee removing a piece of monitoring equipment that was causing problems at a power substation in southwest Arizona, officials said. The power loss should have been limited to the Yuma, Ariz., area. The power company, Arizona Public Service, was investigating why the outage wasn’t contained.

Homes and businesses were darkened from southern parts of Orange County to San Diego to Yuma. It also affected cities south of the border across much of the state of northern Baja.

“It feels like you’re in an oven and you can’t escape,’’ said Rosa Maria Gonzales, a spokeswoman with the Imperial Irrigation District in California’s sizzling eastern desert. She said it was about 115 degrees when the power went out for about 150,000 of its customers.

In Tijuana, people wandered out of their hot homes into the street to cool off while restaurants scrambled for ice to save perishable food.

In San Diego, the trolley system that shuttles thousands of commuters every day was shut down and freeways were clogged at rush hour. Trains were stopped in Los Angeles, an Amtrak spokesman said, because there was no power to run the lights, gates, bells and traffic control signals.