THIS STORY HAS BEEN FORMATTED FOR EASY PRINTING
Politcal notebook 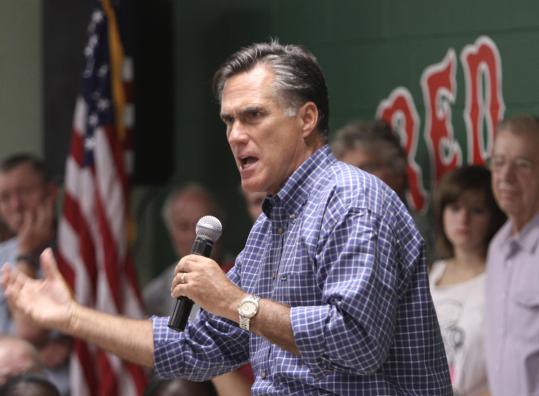 WASHINGTON - Mitt Romney is the Republican front-runner no longer.

For months, the former Massachusetts governor has been atop of nearly every measurement in the Republican presidential contest. He led almost every poll, especially those conducted nationally.

But two new polls have Romney trailing - by double digits - the newest candidate in the race, Governor Rick Perry of Texas.

In the first Gallup poll conducted since Perry entered the field a week and a half ago, 29 percent of Republicans and Republican-leaning independents said they are most likely to support the governor, compared with 17 percent for Romney.

Representative Ron Paul of Texas was third with 13 percent, followed by Representative Michele Bachmann of Minnesota with 10 percent.

The poll was conducted from Aug. 17-21 and has a margin of error of 4 percentage points.

Another new poll, from Public Policy Polling, had similar results. Perry was at 33 percent, Romney at 20 percent, and Bachmann at 16 percent.

Romney has for months been considered the race leader, though one with shaky support on which Perry seems to be capitalizing.

Still, the quick start for Perry could simply be a measurement of new buzz around a new candidate. Other late entries - Republican Fred Thompson in 2008 and Democrat Wesley Clark in 2004 - also saw a big bounce upon entering their races, only to falter as debates and primaries unfolded.

Romney critics parade their points at N.H. forumLEBANON, N.H. - Mitt Romney was greeted by about 10 protesters and a number of skeptical voters at the Lebanon Senior Center last night, where a crowd of about 150 gathered to hear him speak at a town hall meeting.

“If I’d been invested in the private market, I wouldn’t have anything left,’’ said Lee Hammond, a Lebanon retiree who said he relies on money from Social Security and was worried that Romney would move toward privatization.

Inside, Romney faced tough questions on topics ranging from Social Security to global warming to the need for government spending.

Democratic activist and teacher Deb Nelson said she liked Romney’s health plan that expanded coverage in Massachusetts and is upset that he opposes President Obama’s attempts to expand health care coverage. “He can’t seem to trip over his feet fast enough to get away from a good health plan,’’ said Nelson, who added that her 17-year-old nephew was diagnosed with leukemia and that the medical bills are piling up.

Romney has stood by his Bay State health plan - which includes an individual mandate - but opposes Obama’s similar reforms on a national level.

Nelson got into a testy back-and-forth with Romney about whether his commitment to a balanced budget would force him to forgo spending on disaster relief or Social Security. “For us to act like we don’t take advantage of those and benefit from them is shameful,’’ Nelson said. “I wish you’d speak to the truth rather than say something you think is a platitude when in fact we do need the government to spend money.’’

Lynn Rubino, a retiree from West Lebanon, quizzed Romney about whether he plans to cut Social Security, saying she is speaking for “people who can’t speak for themselves.’’

Romney said he saw the signs of the protesters. “Republicans like myself aren’t going to cut Social Security or Medicare for people who are retired or near retirement,’’ Romney said. “Democrats keep pushing this. It’s not the truth. . . . For people who say they are, they’re demagoguing an issue that harms America.’’

A voter then raised the issue of W Spann LLC, a mysterious company that gave $1 million to a pro-Romney political action committee, then immediately dissolved. After watchdog groups filed complaints, the donor came forward as Edward Conard, a business associate of Romney’s.

Romney responded that there was no need to keep the company active since Conard decided not to donate to any other candidates. He said nothing is hidden, now that Conard came forward. “Given the fact he said, ‘Oh, it’s me,’ . . . no harm, no foul,’’ Romney said.

Cheney reveals he readied resignation letter in 2001WASHINGTON - Former vice president Dick Cheney said he had a secret resignation letter signed and stored in a safe for most of the Bush administration in case he became incapacitated.

Cheney said he signed the resignation letter in March 2001, about two months after taking office and four months after suffering another heart attack. He said only one of his staffers and President George W. Bush knew the letter existed.

One of the reasons for having a resignation letter on hand, Cheney said, was his history of health problems. He said the letter could have been used if he had been incapacitated by a heart attack or stroke.

Cheney discussed the secret letter in an interview with NBC News to promote the release of his memoir, which will be released next week.