Kentucky banned the practice after reports of revelry 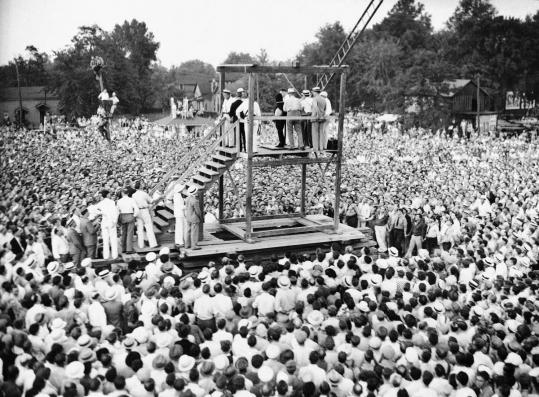 A crowd watched as a black hood was placed on Rainey Bethea’s head before his hanging on Aug. 14, 1936. In 1938, Kentucky ended public executions - the last state to do so. (File/Associated Press)
By Brett Barrouquere Associated Press / August 14, 2011

OWENSBORO, Ky. - Bob Howe points to an overgrown, muddy patch of land in a cemetery in Owensboro, gesturing to where the grave of the last man publicly executed in the United States may be.

“I think it was over there,’’ said Howe, an 81-year-old lifelong Owensboro resident and retired county coroner. “I used to pass it on the way to school. That’s what I was told. It was over there somewhere.’’

The grave is anonymous and unmarked, like other places associated with Rainey Bethea’s hanging on Aug. 14, 1936. On the 75th anniversary of the execution, it is an event some in Owensboro would like history to remember differently.

Bethea, a farmhand and sometime criminal, went to the gallows near the banks of the Ohio River before a throng estimated at as many as 20,000. The execution drew national media coverage focused on a black man being executed by a white, female sheriff with the help of a professional hangman.

“It was not a carnival in the end,’’ insisted 85-year-old James Thompson, the son of then-sheriff Florence Thompson.

Still, Kentucky lawmakers cited the negative publicity surrounding Bethea’s hanging in ending public executions in the state in 1938. Kentucky was the last state to do so. Later, Governor Albert B. “Happy’’ Chandler expressed regret at having approved the repeal, saying: “Our streets are no longer safe.’’

By the time Bethea went to the gallows, most states had closed executions to the public and used the electric chair because hangings were “ghoulish events’’ said Deborah Denno, a Fordham University professor who studies the death penalty.

“There was a feeling that with the pain and botched hangings . . . it was inviting the worst in human behavior,’’ Denno said.

Headlines from across the country screamed the news. From Chicago - “Death Makes a Holiday: 20,000 Revel Over Hanging.’’ From Evansville, Ind. - “Ghostly Carnival Precedes Hanging.’’ From Louisville - “’Did You Ever See a Hanging?’ ‘I Did,’ Everyone in this Kentucky Throng can now Boast.’’ Newspapers described vendors selling hot dogs, popcorn, and drinks.

“Every bar was packed to the doors. Down the main street tipsy merrymakers rollicked all night. ‘Hanging parties’ were held in many a home,’’ Time magazine reported in an Aug. 24, 1936, article.

Sheriff Thompson consulted with a priest before deciding to go through with the hanging, the magazine said: “Nevertheless, soft-hearted Sheriff Thompson sighed: ‘I suppose I will spend the rest of my life forgetting - or trying to forget.’ ’’

Bethea, convicted of rape, was 26 or 27 at the time (records listed only his year of birth, 1909), and he appears young and thin, wearing a cross on a chain around his neck, in a photo of his last meal.

Pictures taken the morning of the hanging show a large crowd - men and women, some holding children - standing in downtown Owensboro, some on the rooftops of brick buildings. They watched as the execution team put a black hood over Bethea’s head. Then, they saw Bethea fall through the trap door. Doctors pronounced him dead about 10 minutes later.

“I think it was an event they found to be kind of scary,’’ Ryan said. “They just stood there.’’

The crime for which Bethea was tried had played as big news in Owensboro: A wealthy, white, 70-year-old widow, Elza Edwards, was raped and strangled in her bed. After less than five minutes of deliberation, a jury convicted Bethea of rape.

Under the law at the time, the maximum penalty for a rape conviction was hanging in the county where the offense occurred.

Had Bethea been convicted of Edwards’s murder - prosecutors never pursued that charge - the sentence would have been a private execution in the electric chair at the state penitentiary. And since his death, executions have been done in private, following a precedent set by New York when it switched to the electric chair in 1898.

Bethea made a final request in a note to his sister, Ora Fladger, in Nichols, S.C.: to take possession of his remains and bury them with other family members. “So good by and paray that we will meet agin,’’ Bethea wrote. His remains were not sent east, and there is no record of why.

Bethea’s body went to a pauper’s grave in Rosehill Elmwood Cemetery in Owensboro, according to Howe, the retired coroner.