No one found in longest search since ’07 rampage 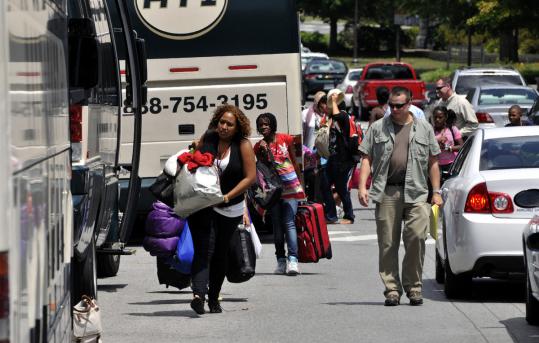 BLACKSBURG, Va. - A report of a possible gunman at Virginia Tech yesterday set off the longest, most extensive lockdown and search on campus since the rampage four years ago that led the university to overhaul its emergency procedures.

No gunman was found, and the school gave the all-clear just before 3 p.m., about five hours after sirens began wailing and students and staff members started receiving warnings by phone, e-mail, and text message to lock themselves indoors. Alerts were also posted on the university’s website and Twitter accounts.

Maddie Potter, 19, of Virginia Beach, holed up inside a campus wood shop, where she had been working on a class project. Staff members locked the doors and turned off the lights.

“I was pretty anxious. We had family friends who were up here when the shooting took place in 2007, so it was kind of surreal,’’ she said. “I had my phone with me, and I called both my parents.’’

The emergency alert was triggered by three teens who were attending a summer program on campus and told police they saw a man walking quickly across the grounds with what might have been a handgun covered by a cloth, authorities said.

Police searched some 150 buildings on the square-mile campus and issued a composite sketch of a baby-faced man who was said to be wearing shorts and sandals, but they found no sign of him. They continued to patrol the grounds as a precaution even after the lockdown was lifted.

“We’re in a new era,’’ said Larry Hincker, a Virginia Tech spokesman. “Obviously, this campus experienced something pretty terrible four years ago. Regardless of what your intuition and your experience as a public safety officer tells you, you are really forced to issue an alert.’’

It was the first time that the entire campus was locked down since the shooting rampage in 2007 that left 33 people dead, and the second major test of Virginia Tech’s improved emergency alert system, which was revamped to add the use of text messages and other means besides e-mail of warning students.

The system was also put to the test in 2008, when an exploding nail gun cartridge was mistaken for gunfire. But only one dorm was locked down during that emergency, and it reopened two hours later.

Earlier this year, federal authorities fined Virginia Tech $55,000 for waiting too long to notify staff and students after two students were shot to death at a dorm during the 2007 rampage.

An e-mail alert went out more than two hours later that day, about the time student Seung-Hui Cho was chaining the doors to a classroom building, where he killed 30 more people and himself.

It was the deadliest school shooting in US history.

This time, several thousand students and the school’s 6,500 employees were on campus for summer classes, officials said. Most of Virginia Tech’s 30,000 students are on summer break and will not return until the fall semester, which begins Aug. 22.

Michael Backus, 20, of Abingdon, Va., was studying in the student center when a staff member told him and a friend to move away from the window because someone with a gun had been spotted.

During the lockdown, they watched TV, studied, and called and texted friends and family.

“Everyone was kind of doing their own business as if nothing was going on,’’ he said. “People were doing homework, calling people. It wasn’t mass hysteria like people might imagine.’’