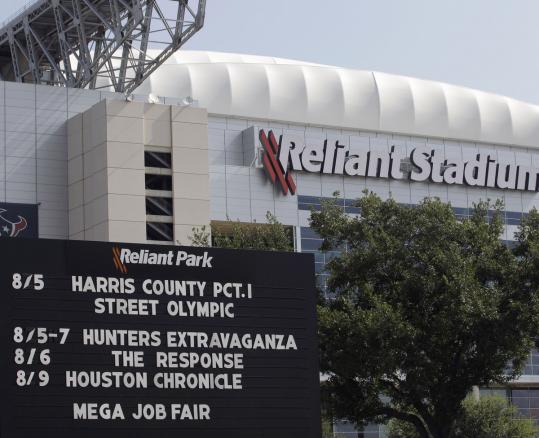 Only about 8,000 free tickets have been claimed for “The Response’’ event Saturday at Houston’s 71,500-seat Reliant Stadium. It is billed as a seven-hour session of Christian atonement. (David J. Phillip/Associated Press)
August 4, 2011

AUSTIN, Texas - Openly and deeply religious, Governor Rick Perry of Texas organized what seemed like a slam-dunk event for a politician in a state where religion and politics walk hand in hand: He would fill Houston’s Reliant Stadium with fellow believers in a seven-hour session of Christian atonement by some of the nation’s most conservative preachers, exhorting believers to pray about the nation’s moral decline.

Since he set up the event scheduled for Saturday, however, Perry has become the most talked about almost-candidate in the 2012 Republican presidential field. But with only 8,000 RSVPs for a stadium that seats 71,500 people, virtually no politicians planning to attend, and a slate of organizers who hold out-of-mainstream views on religious freedom, gay rights, and even Adolf Hitler, the event has become a potentially risky political gamble.

Some conservatives suggested the overtly religious event, called “The Response,’’ could distract from Perry’s key selling points on the relatively successful Texas economy and could backfire in such places as New Hampshire, the first primary state.

“One thing Republicans are going to demand this election is a candidate who can beat Barack Obama,’’ said Alex Castellanos, a Republican strategist who has worked for Perry opponents but is now unaligned. “The election is all about him. A candidate who establishes his identity on the fringe, talking about social and religious issues, when the economy is going over a cliff, risks marginalizing himself, becoming unacceptable to independents and unelectable. That would be the kiss of death.’’

Castellanos added: “Perry should be trying to establish recognition as the minister of job creation. This leads him to build an identity as just a minister.’’

But Mark McKinnon, a GOP consultant and former aide to President George W. Bush, said success will be measured in how Perry handles it.

“He has quickly become a favorite of the Tea Party types and social conservatives,’’ McKinnon said. “The question will be whether Perry can calibrate his remarks in a way that makes him appealing to a broader audience.’’

Perry is not expected to announce his decision on a presidential bid until sometime after the rally.

Perry, 61, began organizing the gathering in December. A month earlier, on the day Texas voters gave Perry a third full term in office, he told the Associated Press that he held many political views that were too extreme for a presidential candidate.

The sponsors of the rally also hold some controversial views.

In a video invitation, Perry says it was inspired by the Old Testament Book of Joel, with an apocalyptic passage on God’s army marching on the Israelites to punish them for their moral decline. Perry says America is facing a similar moral crisis today. In Joel, God calls on the Israelites to come together in a “sacred assembly’’ with “fasting, with weeping, and with mourning.’’ Perry said Americans should do the same at the gathering at Reliant Stadium.

He sent invitations to all of the other governors in the United States, members of Congress, and the Obama administration, among others.

But only one of those politicians, Kansas Governor Sam Brownback, has said he will attend. About 8,000 people have registered for the free event, leaving the prospect of 64,000 empty seats. By comparison, nearby Lakewood Church - the nation’s largest megachurch - averages 30,000 worshippers a week.

The American Family Association is paying for the event - no public money is involved. The evangelical association is a nonprofit that describes itself as being “on the front lines of America’s culture war’’ and was previously known as the National Federation for Decency. The group, based in Tupelo, Miss., publishes a magazine and operates 200 radio stations. The group condemns homosexuality, opposes abortion rights, and argues that the First Amendment’s guarantee of religious freedom only applies to Christians.

The Southern Poverty Law Center has labeled the association a hate group for spreading misinformation about homosexuals and transgender people. Perry has dismissed such characterizations and appeared on a Christian radio show with the association’s president, Tim Wildmon.

The prayer gathering “is not political, it’s not about promoting an organization. . . . It’s about people calling out to God,’’ Perry said on July 14. “I want God helping me, guiding me, giving me direction.’’

A key pastor speaking at “The Response’’ is televangelist John Hagee. GOP presidential nominee John McCain rejected Hagee’s endorsement in 2008 after a recording surfaced in which the preacher suggested God sent Adolf Hitler to hunt Jews so they would go to the Promised Land.

Perry said “The Response’’ is designed to focus on God, not politicians.

“There will be folks who think it’s something else, that there are other motivations. But it’s not about me,’’ Perry said. “It’s about him.’’

Obama, who reaches the milestone birthday today, plans to spend the morning at work in the Oval Office. In the afternoon, senior members of his staff will toast him in a reception in the Blue Room of the White House. And at night, he will celebrate with family and friends, including some coming in for the occasion from his hometown of Chicago.

An official said the Obamas will pay for the president’s birthday party at the White House.

The president will then spend the weekend at Camp David, the private presidential retreat in Maryland.