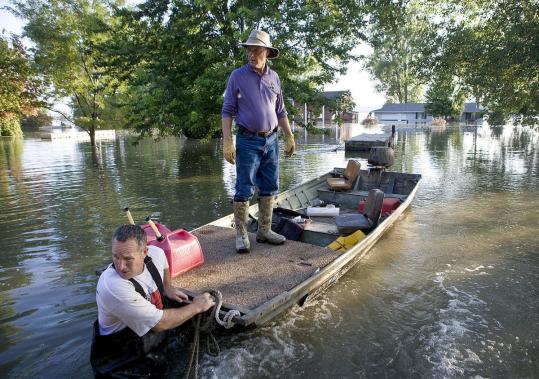 DAKOTA DUNES, S.D. - Some skeptical locals offered a warning when developers transformed this mostly barren peninsula at the intersection of two rivers into an exclusive planned community, complete with million-dollar homes and a private golf course designed by Arnold Palmer.

They call it “the Dunes’’ for a reason, the warning went - the rivers put the sand there, and the rivers could sweep it away. But, much like the developers, the new residents were not worried. A few even paid a premium to be closest to the flowing water of the Missouri and the Big Sioux.

Now, a little more than two decades later, the homes on Spyglass Circle and Pebble Beach Drive have been evacuated and the 18th hole is under six feet of water, as miles of levees strain to keep this community from surrendering to a historic flood.

Many residents here at the southeastern tip of the state, where it borders Nebraska and Iowa, say they never imagined this chain of events. Scott Mackie, like most of his neighbors, did not take out flood insurance on his newly built house - not because he could not afford it, he said, but because he believed the Missouri had been tamed by a system of dams and reservoirs.

“This community has been here over 20 years and never had a problem,’’ he said. “I didn’t think it was an issue.’’

A river makes an unpredictable neighbor, as the last few months have reminded.

And now, some people are using the high waters from North Dakota to New Orleans to revisit longstanding questions about whether the very government programs designed to safeguard people from floods - including protective measures such as dams and levees and recovery programs such as flood insurance and disaster assistance - actually encourage them to take unnecessary chances.

“Most people don’t understand what flood risk is,’’ said Gerry Galloway, a civil engineering professor at the University of Maryland who has written extensively about his concerns. “They assume that if there is some level of protection like a levee or an upstream dam, they’re safe. As a general rule, public officials don’t like to dissuade them of that.’’

Even those public officials can fall victim.

As governor of South Dakota, Mike Rounds visited many flooded communities during his two terms. But when he left office this year, he moved into a house in Pierre, the state capital, on the Missouri River. He was forced to evacuate just months later.

Like many state residents, he thinks the flood is largely the result of mismanagement by the Army Corps of Engineers, which operates the dams. (The corps said the releases were forced by unprecedented snow and rains.)

“If I had to do it all over, I’d still purchase the same lot,’’ Rounds said. “I really do think it’s an aberration.’’

Most of the major cities of the region - including Sioux City, just across the way in Iowa, a few miles east of Dakota Dunes - were settled on riverbanks. But even as many experts warn that climate change is increasing the frequency and severity of flooding and other natural disasters, developers continue to build homes in flood-prone areas.

“Older communities, when they were being settled, learned through trial and error where to build - that’s why Sioux City is established on higher ground,’’ said Paul Eckert, the city manager. “It’s only in recent decades that you’ve seen development in the lower areas like the Dunes.’’

Some of that development reflects either a calculated gamble or general confusion about federal estimates of areas with higher flood risk, based on maps produced by the corps that are in the process of being revised.

Many people in these higher-risk areas mistakenly thought that a flood could not occur more than once a century - the areas are called hundred-year flood zones, based on the calculation of an annual 1 percent chance of flood. Those outside often falsely believe that they are not at risk, even though they account for about a quarter of all flood insurance claims.

But as the trailers, hot tubs, and decks that have bobbed down waterways in recent weeks suggest, there is also an element of willful disbelief behind the decision to move close to rivers.

The Dakota Dunes used the twin attractions of river views and low taxes to attract wealthy professionals from the three-state Sioux City metro area. Though developers initially urged residents to get insurance, they noted that the Missouri had been successfully controlled since the dam system was built.

As the years passed, those who dismissed a flood as unlikely started talking about it almost as an impossibility. Most residents dropped their flood insurance; only 172 homes in the entire county now carry it, backing studies that found that homeowners typically dropped the insurance after several dry years.