Minnesota shutdown ends with signing of $35.7b budget 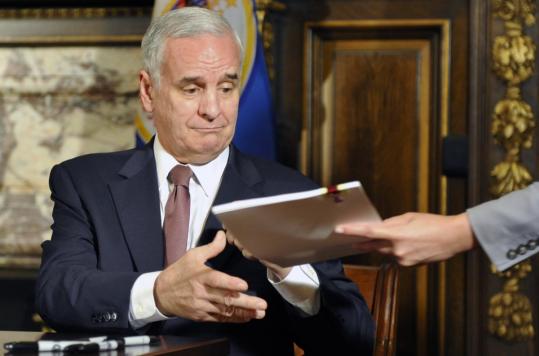 After a legislative session that dragged on late into the night, Governor Mark Dayton of Minnesota signed new spending plans for the state yesterday, ending the longest and broadest shutdown in state history.

Since July 1, the state’s parks had been barricaded, highway rest stops blocked off, and the Capitol closed. Some 22,000 state workers had been sent home, the state lottery was suspended, and licenses were unavailable, even those for fishing during Minnesota’s treasured warm season.

Restarting the state’s operations now will be no small task, state officials said, calling for patience - more patience - from Minnesotans. Road construction projects, about 100 of which were halted, need to be cleaned up for work to begin again. State offices, including licensing services, are weeks behind on mail, applications, and requests, and it may be weeks more before things are back to normal.

Resolution of the impasse had come, at last, not as a pure victory for either Republicans (who wanted more cuts to solve the state’s $5 billion deficit) or for Democrats (like Dayton, who wanted to raise taxes on the wealthiest residents).

Instead, leaders agreed to spend $35.7 billion over the next two years, which was more than Republicans had hoped, by using borrowing maneuvers to come up with the last $1.4 billion. The state will delay payments to local school districts and borrow money against expected payments from the tobacco industry.

Some Republican lawmakers, who control both chambers of the state Legislature for the first time in nearly four decades and will be up for reelection next year, lauded the result as a win because the plan does not raise taxes. But others, in both parties, derided the compromise as merely pushing the state’s financial problems further into the future.

Still, the prospect of reopening Minnesota was cheered by many. Still uncertain was the cost of the 20-day shutdown; many of those who would normally tally such costs were laid off. Some in the state, too, were considering a less tangible cost: How would memories of the shutdown - with people turned away at state parks and politicians going days without talking to one another - affect the state’s image of lovely lakes and relatively efficient government?

As recently as Tuesday, the compromise - reached late last week - appeared in question at moments. Lawmakers needed to vote on a series of bills, and immediately after they began meeting in special session on Tuesday, they adjourned, setting off a new flurry of worries that a deal might be falling apart. Democrats provided little support for the compromise, so the Republican majorities needed significant support.

Not long before dawn yesterday, legislators finished their work.