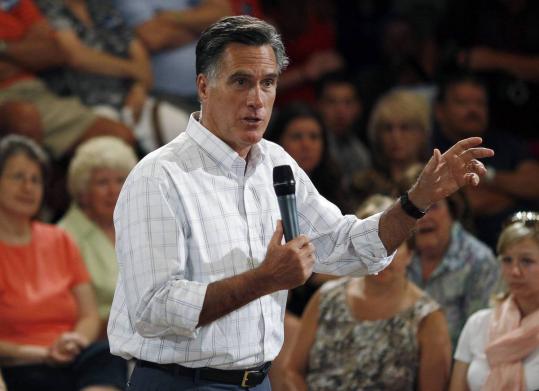 Mitt Romney has relied heavily on a fund-raiser who has lobbied on behalf of a large mortgage service provider. (Brian Snyder/Reuters)
By Matt Viser Globe Staff / July 19, 2011

WASHINGTON - Mitt Romney has spent time on the campaign trail railing against high foreclosure rates, traveling earlier this year to one of the country’s foreclosure capitals, North Las Vegas, to bring the point home.

But as he has built his fund-raising machine, he has relied heavily on a man who has lobbied Congress on mortgage reform and antipredatory lending legislation that contained strict rules aimed at preventing another subprime mortgage collapse.

T. Martin Fiorentino Jr., who raised $102,900 for Romney, lobbied on the legislation on behalf of Lender Processing Services, a so-called “foreclosure mill’’ that was reprimanded in April by the government for “unsound practices related to residential mortgage loan serving and foreclosure processing.’’

In the world of political fund-raising, Fiorentino is known as a “bundler,’’ someone who solicits contributions for a candidate and brings them to a candidate’s campaign - in this case Romney’s - in one lump sum.

Romney has not released a complete list of his campaign’s bundlers.

But an ethics law passed in 2007 requires candidates to disclose any registered lobbyist who raises at least $16,000 for a candidate. Romney’s latest campaign finance report, filed on Friday, lists six lobbyist-bundlers who combined raised nearly $520,000 out of the $18.4 million Romney brought in over three months.

Of the lobbyists, Fiorentino raised the second largest amount, trailing only Patrick J. Durkin Sr., a managing director at Barclay’s Capital, who raised $167,800 for Romney.

The other lobbyists who are bundling money for Romney are Wayne Berman, a major GOP lobbyist at Ogilvy Government Relations whose clients include top oil and gas companies; David Beightol, a managing principal at Dutko Worldwide, a GOP lobbying firm that is run by longtime Romney adviser Ron Kaufman; Drew K. Maloney, a former staffer for then-majority whip Tom DeLay who is now at Ogilvy; and Judi A. Rhines, who cofounded the Rath Group, which is based in New Hampshire and is run by Romney adviser Tom Rath.

Fiorentino’s office referred requests for comment to the Romney campaign, which released a brief statement that did not address his role or whether it would release a more complete list of bundlers.

“We disclose all of the information about our donors as required by law and anyone who is interested can review it publicly,’’ said campaign spokeswoman Andrea Saul.

President Obama’s campaign on Friday voluntarily released its list of nearly 250 big-dollar bundlers, and challenged Romney and others to do the same.

The Obama campaign does not accept donations from registered lobbyists.

The only other Republican candidate who filed a lobbyist bundler report was Tim Pawlenty. The former Minnesota governor reported one lobbyist: James E. Hyland, who founded the Pennsylvania Avenue Group, raised $17,610 for his campaign.

Fiorentino’s Jacksonville, Fla.-based firm, the Fiorentino Group, has been paid $180,000 by Lender Processing Services since late 2009, according to lobbying disclosure forms. The firm lobbied the House and Senate on the Mortgage Reform and Anti-Predatory Lending Act.

The legislation, which was sponsored by Democrats, came in response to the subprime mortgage crisis and was meant to prevent lenders from making loans that borrowers would have difficulty repaying. It was approved by the House in May 2009, but wasn’t taken up that year by the Senate.

Much of the legislation ended up being included last year in the Dodd-Frank Act, a larger overhaul of national financial regulations.

Lender Processing Services is one of the country’s largest mortgage service providers, claiming to handle more than half of all foreclosures and providing services for more than 1,000 financial institutions. The company came under scrutiny after admitting last year that one of its subsidiaries, DocX, had been improperly preparing some of the foreclosure documents.

Fiorentino’s firm was listed as the company’s lobbyist on its most recent congressional lobbying disclosure form, filed in April.

On the campaign trail, Romney has sought to highlight the high foreclosure rate to critique President Obama’s handling of the economy. Several months ago, he traveled to North Las Vegas to meet with homeowners in a neighborhood beset by foreclosed-upon homes.

At the time, he didn’t address the crisis head-on, or propose any specific plan or legislation. Instead, he said, if more jobs were created, foreclosed homes would be repaired and property values would increase. But he largely criticized government intervention.

“The best thing you can do for this community is not to come here and give checks, to go around and give everybody a check. That doesn’t solve the problem,’’ he said. “The right thing you can do is to create jobs, and to make the environment of America the best in the world for job growth, for investment, and for the economic vitality we deserve.’’