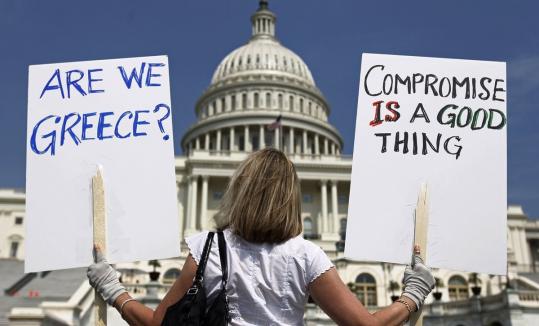 A demonstrator held signs in front of the Capitol building in Washington to protest debt in the United States. (Kevin Lamarque/Reuters)
By Julie Pace Associated Press / July 19, 2011

WASHINGTON - The debt showdown isn’t just the dominant issue in Washington this summer - it’s virtually the only one getting any attention in the nation’s capital.

From the White House to Congress, the negotiations over raising the US debt limit have overshadowed or halted work on everything from job creation to the military conflict in Libya to education reform.

And the debt debate has hamstrung President Obama’s ability to hit the road to campaign and raise money for his reelection bid.

The frenetic pace of Washington often means what is news one day can fade to the background the next. Rarely does a singular issue consume so much of the oxygen for such a sustained period.

Obama’s only trip outside Washington in July was a weekend jaunt to the presidential retreat at Camp David.

Lawmakers who previously met with the president only sporadically came to the White House for five straight days of talks and probably will be back again before Aug. 2, when the Treasury Department has warned the government will default unless the debt ceiling is raised.

The House and Senate canceled weeklong breaks planned for this month so they could stay in town to work on a deal.

The president has foreshadowed even more debt talk disruptions through the rest of the summer if lawmakers don’t reach a compromise.

“We are not going to let Congress go on August recess - have a one-month vacation - while this problem doesn’t get solved,’’ Obama said in a television interview Thursday.

Senate majority leader Harry Reid said yesterday that his chamber will meet every day, including weekends, until Congress sends Obama legislation to make sure the government does not default on its obligations.

The GOP-controlled House is expected to pass today a Tea Party movement-backed plan to let the government borrow another $2.4 trillion, a measure conditioned on big and immediate spending cuts and adoption by Congress of a constitutional amendment to balance the federal budget.

The measure, opposed by most Democrats, is not expected to succeed in a Senate vote tomorrow.

Democrats say it would lead to decimating budget cuts. The White House called the bill an “empty political statement’’ that Obama would veto.

At the same time, Obama said the two sides are “making progress’’ after back-channel conversations with such Republicans as House Speaker John Boehner of Ohio and majority leader Eric Cantor of Virginia, with whom Obama met on Sunday morning.

With the Aug. 2 deadline looming, the all-consuming nature of the talks is a near-imperative for lawmakers and the president.