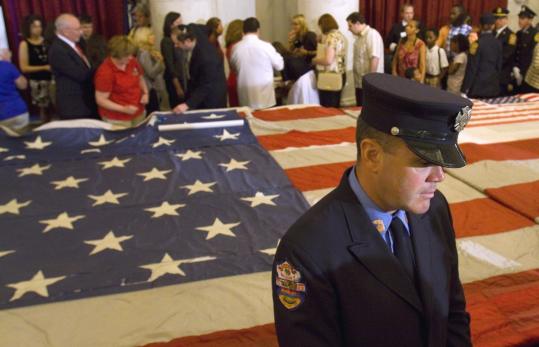 President Obama’s campaign committee moved a fund-raiser featuring Mayor Rahm Emanuel of Chicago from the world headquarters to another location in New York City yesterday after the Globe inquired about the propriety of a major pharmaceutical company hosting an event that could benefit the administration regulating it.

“This is a general fund-raising event for the campaign that has nothing to do with a specific company and the attendees will not be from any one company or sector,’’ Obama spokesman Ben LaBolt said in a statement.

A Pfizer spokesman did not address the change in locale but defended the company’s initial decision to host the fund-raiser Thursday.

“Pfizer is proud to participate in the political process and encourages its colleagues to do so as well,’’ said the spokesman, Raul Damas. “All activities are undertaken in strict compliance with campaign finance law.’’

Political fund-raisers are often held in private homes or commercial hotel and convention space to accommodate crowds and avoid conflict-of-interest charges. While they are sometimes held in corporate settings, management will often insist that they be linked to individual employees rather than the broader firm itself.

Emanuel, who formerly served as White House chief of staff, is slated to attend a series of fund-raising events for Obama in New York. In one of them, he will be the keynote speaker for the launch of a “Tri-State Speaker Series’’ aimed at raising money in the cash-rich region of New York, New Jersey, and Connecticut.

Attendees are being asked to donate $1,000 for lunch with Emanuel or $5,000 to attend each of what will be monthly events during the next year, according to an invitation obtained by the Globe.

The money will go to the Obama Victory Fund 2012, which splits its proceeds between the president’s campaign committee, Obama for America, and the Democratic National Committee, which the president controls but is charged with electing other Democratic candidates across the country.

On Wednesday, Obama for America announced it had raised $47 million during the past three months, more than double the $18.2 million raised by the president’s nearest Republican reelection challenger, Mitt Romney.

The DNC also reported raising $38 million, and the invitation showed the two entities’ expanded push for even more money.

It said the Emanuel event was being held at the offices of Pfizer.

Pfizer bills itself as “the world’s largest research-based pharmaceutical company.’’

It ranks first in world pharmaceutical sales and produces such prominent products as Lipitor, Viagra, and Celebrex.

Its activities are regulated by, among others, federal agencies such as the Food and Drug Administration.

The fund-raiser is now being held at the University Club in New York.

Republicans, Democrats wrangle at Warren hearing WASHINGTON - Elizabeth Warren, architect of the new Consumer Financial Protection Bureau, faced another round of hostile questions from House Republicans yesterday morning with a week to go until the bureau opens. But some of the sharpest exchanges came before the Harvard professor and bankruptcy specialist had a chance to speak.

In the opening minutes of the House Oversight and Government Reform Committee hearing, Democrats accused the panel’s Republican leaders of wrong-headed priorities. Instead of again bringing Warren, whose bureau was created to help individuals negotiate the maze of mortgage and finance products and protect their interests, before the committee, they should be investigating banks’ illegal foreclosures on the homes of service members on the front lines of Iraq and Afghanistan, Democrats said.

After Elijah E. Cummings of Maryland, the committee’s top Democrat, proposed that the committee subpoena mortgage companies accused of those practices, confusion swamped the proceeding. John F. Tierney, a Salem Democrat, tried to make a point about parliamentary procedure, then, in frustration, said to chairman Darrell Issa, Republican of California: “What part of the English language don’t you understand?’’

In an effort to settle the proceedings, the committee took a five-minute break, after which Issa promised a vote on Cummings’s motion by the end of the hearing. Stephen F. Lynch, a South Boston Democrat, tried to get Issa’s attention, but the chairman pointedly ignored him and swore in Warren.

The tenor of the hearing improved with her appearance, and although there were a few pointed exchanges between Warren and Republicans, none sunk to the level of a May appearance, when GOP lawmaker Patrick McHenry of North Carolina accused her of being a liar about her schedule just before she departed.

Still, there was skepticism from Republicans such as Issa, who said he feared that the bureau will not be accountable to Congress or the public.

“This subagency, independent as it might be, could well become an agency that, while well-intended, is not well understood or transparent to Congress or to the American people,’’ he said.

“I’m hopeful that the Democrat and Republican leaders will continue to work with the administration to basically come together with a deal that not only makes the appropriate cuts, but prohibits our country from moving into default,’’ the Massachusetts Republican said.

As an Aug. 2 deadline looms, most of the recent focus in the debt limit talks has been in the House, where Republican leaders have insisted that any proposal that raises taxes cannot pass the chamber. But the deadlock has also been a vigorous subject of debate in the Senate, which Democrats control.

The debt limit issue has become political fodder for Massachusetts Democrats, who criticized Brown in an e-mail yesterday for voting against a Senate resolution calling on millionaires to “make a more meaningful contribution to the deficit reduction effort.’’

Brown said that “we’ve got to stop playing games’’ - including President Obama - who he said is using “the fear game’’ about cuts to Social Security to pressure Republicans.