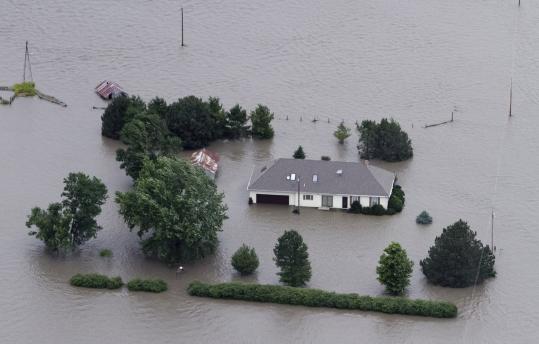 Federal officials have been pushing the sale of flood insurance policies that might not cover damage from flooding along the Missouri River that began last month. (Nati Harnik/ Associated Press/ File)
Associated Press / July 11, 2011

KANSAS CITY, Mo. - Insurance agents in states along the swollen Missouri River basin say federal officials are causing widespread confusion among property owners by pushing the sale of flood insurance policies that might not cover damage from the river flooding that began last month.

The insurance companies say that officials with the Federal Emergency Management Agency, which administers the national flood insurance program, are still urging private agents to sell the insurance even though the policies contain deadlines that appear to exclude the Missouri River flood damage.

The federal officials explain that some of the damage along the river might still be covered under the program’s highly complicated rules, but how much will not be known until after the flooding is over.

“They won’t give you a clear answer,’’ said Larry Case, executive vice president of the Missouri Association of Insurance Agents. “It causes issues for agents, because they get frustrated when they can’t give policyholders a definitive answer.’’

The questions primarily affect property owners who waited until recently to decide on flood insurance because their property usually does not flood. The extensive flooding this year - the worst since 1993 - is threatening thousands of acres that normally remain dry. The federal government has been encouraging more property owners along the river to make longer-term commitments to insurance.

“We’ve got to communicate with people that you can’t wait until the last minute to buy flood insurance,’’ said Brad Kieserman, FEMA’s chief counsel.

The confusion about coverage mostly stems from a 30-day waiting period in flood insurance policies. According to FEMA, the Missouri flood officially began on June 1 so only policies bought by May 2 would have gone into effect and therefore would cover the resulting damage.