Doesn’t back down in N.H. campaign stop 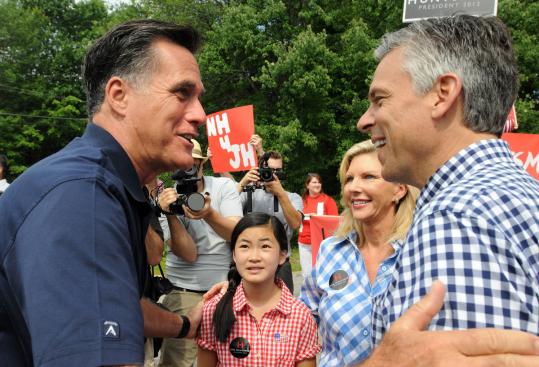 The tenet has been a central platform of Romney’s campaign even as independent fact-checking organizations criticized it.

While Romney last week seemed to backtrack from the comments, he repeated them yesterday at Independence Day appearances in New Hampshire.

The comments came as Romney and Republican rival Jon Huntsman, a former Utah governor and ambassador to China, campaigned at the same parade in Amherst on a day that generally was more about patriotism than policy.

Romney tried to reengage with voters, some of whom had supported him for years, while Huntsman faced the challenge of introducing himself to voters who hardly knew him. Both candidates said doing well in New Hampshire’s first-in-the-nation primary is central to their campaigns.

Romney’s earlier comments about the recession drew scrutiny from organizations which pointed out that economic growth, measured by gross domestic product, resumed after President Obama took office, and the recession ended six months after Obama was sworn in.

Asked by a reporter in Andover, N.H., what his statement was based on, Romney compared the current recovery with the one under President Ronald Reagan in the 1980s.

“The rebound from that recession put Americans back to work at much faster pace than we’re seeing now,’’ Romney said.

Huntsman said he had not followed the debate over Romney’s comments and did not directly answer a question about whether Obama made the recession worse.

But he agreed with Romney’s sentiment that the economy is having a weak recovery.

“There’s no environment for growth,’’ Huntsman said. “It is a jobless recovery. It’s one without a level of confidence in our tomorrow.’’

Both candidates spent the morning shaking hands, signing autographs, and holding babies. Romney frequently jogged along the parade route, at times marching backward as he shook hands with supporters.

Romney taught the New Hampshire volunteers who accompanied him a campaign song that was used by his father George, a former Michigan governor who ran for president in 1968.

Before the parade started, Romney walked over to greet Huntsman, and they had a brief exchange about the weather.

Both candidates bought lemonade from children, with Romney dropping a $5 bill for his 25 cent cup.

Voters along the route knew Romney from his past run. “I love Romney,’’ said Mackenzie Lawrence, a University of New Hampshire student. “He has good values, is well spoken, and is a good businessman.’’

Many voters knew little about Huntsman. Asked about both candidates, Cynthia Granahan, a retiree from Center Ossipee, said, “Romney’s got a good shot. I haven’t heard of the other one.’’

Huntsman said he hopes to fix that with “shoe leather’’ politics.

“We’re slowly moving up and moving up at a pace and rate I’m very happy with,’’ Huntsman said.