In N.H. visit, Bachmann praises moratorium on US income tax 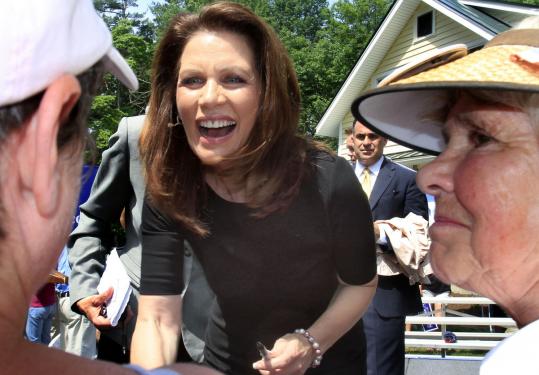 RAYMOND, N.H. — Republican presidential candidate Michele Bachmann suggested yesterday that she would support imposing a moratorium on the federal income tax as a way to boost the economy.

At a backyard event, the Minnesota congresswoman spoke to about 150 people, a day after she announced her bid for president in Waterloo, Iowa. She was greeted enthusiastically in the first-in-the-nation primary state, where a new poll shows her popularity growing.

Her comments on the income tax came in response to a question from Don Gorman, a former New Hampshire state representative from the Libertarian Party. Gorman asked Bachmann to comment on his suggestion to improve the economy: “Put a moratorium on the entire income tax for one year for every citizen in this country and watch this country take off.’’

“That’s awesome,’’ Bachmann responded. “You will be happy to know that a colleague of mine from Texas, [Representative] Louie Gohmert, gave that suggestion.’’

But Gohmert’s proposal was not exactly what Gorman suggested. Gohmert, a Republican, gave up his advocacy of a yearlong income tax moratorium after it received little support from colleagues.

He proposed his measure in January 2009, as Congress was debating whether to release $350 billion from the Troubled Asset Relief Program. His bill would have given that money to workers rather than government-selected companies by putting a two-month moratorium on payroll taxes and excluding income earned during those months from the income tax. Any loss to the Social Security trust fund would have been made up with TARP money. Since the bill never made it out of committee, there is no government estimate of its economic impact.

Curtis Dubay, senior tax policy analyst at the conservative Heritage Foundation, said advocates of a tax moratorium in 2009 said it might have stimulated the economy more than a stimulus program, but today the idea of a one-year income tax holiday is not being discussed because of its cost. Without the tax, the deficit would rise from $1.7 trillion to $2.7 trillion this year, Dubay said. Bachmann has been a leading advocate for cutting the debt and deficit. Her campaign did not respond to a request to clarify her stance on the income tax.

Bachmann, a favorite of the Tea Party movement who started the Tea Party caucus in Congress, has seen her support grow since her strong performance in the New Hampshire debate earlier this month. She was tied for the top spot with former Massachusetts governor Mitt Romney in a poll of likely Iowa voters by the Des Moines Register last weekend. A poll of likely New Hampshire primary voters released last night by Suffolk University/7NEWS found that Bachmann would get 11 percent of the vote, compared with 3 percent in May. Romney remained ahead with 36 percent, with every other candidate in single digits.

Enthusiasm was clear at yesterday’s event. “She’s our hope for winning and beating Obama,’’ said Belinda Hamel, a church secretary from Danville. “She stands for all the principles I value — our freedom to worship, to have property [and] small government, not large government.’’

Republican state Representative David Bates, of Windham, who founded the Southern New Hampshire 912 Project, a libertarian-leaning conservative group, said he believes he can count on Bachmann as someone who “believes in following the Constitution.’’

As president, Bachmann said, her top priority would be improving the economy by cutting government spending and lowering taxes. She said she would reduce corporate taxes, eliminate the capital gains tax, and “put a nail in the coffin of the death tax.’’

Bachmann did not mention comments she made earlier yesterday on “Good Morning America,’’ when she said she would be open to eliminating the federal minimum wage as a way to address unemployment.

Correction: Because of an editing error, early editions of the paper incorrectly identified Representative Louie Gohmert of Texas in this article about an income tax moratorium.