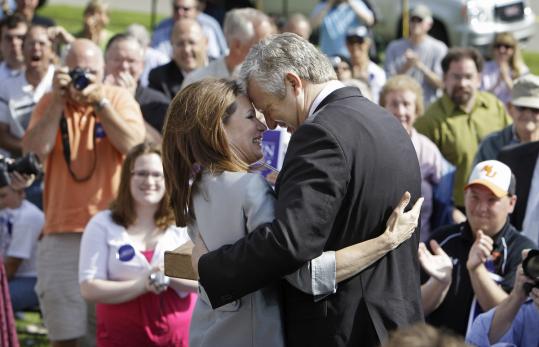 WATERLOO, Iowa — Republican Michele Bachmann officially launched her White House bid yesterday, casting herself as hard-charging conservative capable of carrying the party into the 2012 election over a crowded field of GOP rivals.

On a sun-splashed morning in the yard of a historic mansion in Waterloo, the three-term Minnesota congresswoman and Tea Party movement favorite insisted the nation can’t afford another four years of President Obama and railed against debt, joblessness, and the president’s sweeping health care law. She argued that she has the appeal to capture the GOP nod and oust the Democratic president.

“Americans agree that our country is in peril today and we must act with urgency to save it,’’ Bachmann told the crowd of family, friends, and supporters. “And Americans aren’t interested in affiliation; they are interested in solutions, and leadership that will tell the truth. And the truth is that Americans are the solution and not the government.’’

The backdrop served as a powerful reminder of Bachmann’s connection to Iowa. Waterloo is her birthplace and the Snowden House once was home to the Waterloo Women’s Club. A recent Iowa poll shows Bachmann essentially tied with national front-runner Mitt Romney, signaling she is a clear caucus favorite.

Bachmann is betting that her standing with the Tea Party movement — she created the Tea Party Caucus in Congress — and affinity with evangelical Christians will deliver a win in the first-in-the-nation caucus state.

“I seek the presidency not for vanity, but because America is at a crucial moment and I believe that we must make a bold choice if we are to secure the promise of the future,’’ she said.

Republican opponents have yet to directly engage Bachmann, but recognize they ignore her at their own peril. Her candidacy presents a particular challenge to fellow Minnesotan Tim Pawlenty, the state’s former governor.

Asked about Bachmann on NBC’s “Today’’ show yesterday, Pawlenty demurred while focusing on his record. “I’ve actually led in an executive position and moved the needle on conservative results,’’ said Pawlenty, who is running radio ads in Iowa that end with the slogan: “Results, Not Rhetoric.’’

Lincoln Financial Group of Concord is a subsidiary of In July 2009, Lincoln National, based in Radnor, Pa., received $950 million from the government’s Capital Purchase Program, part of TARP, the Troubled Asset Relief Program.

Romney did not mention TARP during his campaign stop yesterday. He has said in the past that he supported TARP and believed it was necessary to prevent a collapse of the financial system. But he has also criticized the government for bailing out banks and said the program was badly implemented.

He wrote in his 2010 book “No Apology’’ that TARP “was intended to prevent a run on virtually every bank and financial institution in the country.’’ But he added, “TARP as administered by [Treasury] Secretary Timothy Geithner was as poorly explained, poorly understood, poorly structured, and poorly implemented as any legislation in recent memory.’’

Romney also told voters in 2009 that when the government starts “bailing out banks . . . we have every good reason to be alarmed and to speak our mind.”

The former Massachusetts governor spoke to 200 employees of Lincoln Financial Group in Concord and at a roundtable with 20 business leaders at Mosaic Technology in Salem.

Romney used the events to criticize the administration’s handling of the US economy. “In February 2009, President Obama said if he hadn’t turned the economy around in three years, it was a one-term proposition,’’ Romney said. “He’s absolutely right.’’

Romney touted his proposals to help small businesses by lowering the corporate tax rate and eliminating loopholes for large corporations. He criticized Obama for having “layered on massive doses of uncertainty’’ for businesses by trying to end President Bush’s tax cuts, pushing a cap-and-trade policy to cut greenhouse gases, and passing health care reform.

When asked about the health care plan he instituted in Massachusetts, which is similar to Obama’s national health care reform, Romney said it was unacceptable for Obama to impose a “one-size-fits-all plan’’ on the entire country, rather than leaving the decision to each state. — SHIRA SCHOENBERG