$90b spent on border security, with mixed results 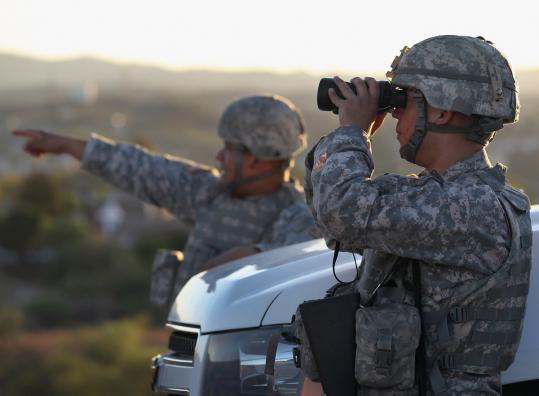 ■ Average annual salary of a Customs and Border Protection officer: $75,000

For taxpayers footing these bills, the returns have been mixed: fewer illegal immigrants but little impact on the terrorism issue, and no stoppage of the drug supply, officials said.

The terrorists who carried out the attacks on Sept. 11, 2001, did not come from Mexico, but 9/11 led politicians to reexamine border security. Ten days later, President Bush announced a new Department of Homeland Security, with tasks including the security of the nation’s porous southern border.

Over the next 10 years, annual border spending tripled as the United States built an unprecedented network along the 1,900-mile border with Mexico: 165 truck and train X-ray machines; 650 miles of heavy-duty fences and sheer concrete walls; twice as many law enforcement officers along the entire stretch; and a small fleet of Predator drones.

The program also includes remote surveillance cameras, thermal imaging devices, and partly buried ground sensors that sound an alarm at headquarters if someone steps on one in the desert.

“Our obligation to secure our borders involves a responsibility to do so in the most cost-effective way possible, and we recognize that there is no ‘one size fits all’ solution to meet our border security needs,’’ said Department of Homeland Security spokesman Matthew Chandler.

Over the years, the goals of the border security measures have shifted.

Early concerns that terrorists could sneak weapons into the United States from Mexico were later overshadowed by worries about violent drug cartels slaughtering people across the Rio Grande. As the US economy faltered, preventing illegal immigrants from sneaking north for jobs became the focus.

“Border security is no longer just about responding to 9/11. It became very much a part of the immigration debate,’’ said Jena Baker McNeill, homeland security policy analyst at the Heritage Foundation, a conservative think tank based in Washington.

Indeed, stopping immigrants at the border has become a bargaining tool for the last two administrations with Congress — fences and guards in exchange for reforming immigration laws, she said.

The buildup has dramatically reduced illegal immigration. Ten years ago, border agents caught 1.6 million illegal immigrants in one year. Last year they caught 463,000. The drop is attributed in part to the US recession, which decreased jobs, but it is also an indication, according to federal officials, that fewer people are attempting to cross the border illegally.

But the spending has not worked to stop the flow of illegal drugs. Last year, border guards seized a record 254,000 pounds of cocaine, 3.6 million pounds of marijuana, and 4,200 pounds of heroin. In response, Mexico’s cartel bosses simply sent more: trainloads of marijuana, cocaine stuffed in fenders and dashboards, heroin packed into young men’s shoes.

A fraction of that amount is seized at the border, a small operating cost for Mexico’s drug lords, who will reap an estimated $25 billion this year from US sales.

Last month, a Justice Department study reviewing the total cost of illicit drug use in the United States, using cost-of-illness studies, federal crime and caseload statistics, and economic models, came up with a figure of $193 billion per year.