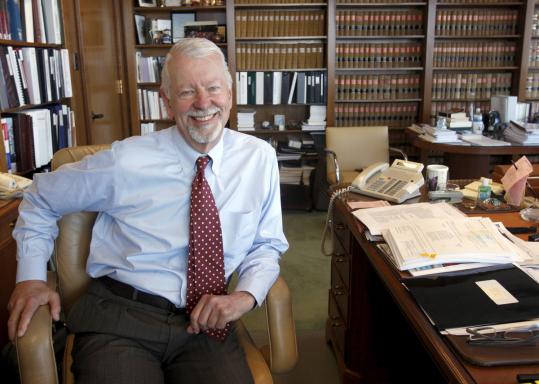 Vaughn Walker, who had struck down California’s same-sex marriage ban last year, said after retiring in February that he has been in a long-term relationship with another man. (Paul Chinn/ San Francisco Chronicle via Associated Press/ File 2009)
By Lisa Leff Associated Press / June 15, 2011

SAN FRANCISCO — A federal judge yesterday upheld a gay judge’s ruling that struck down California’s same-sex marriage ban, saying his fellow jurist was under no obligation to disqualify himself simply because he was in a long-term relationship with another man.

In a 19-page decision responding to the first attempt in the nation to disqualify a judge because of his sexual orientation, Chief US District Judge James Ware said the court’s former chief judge, Vaughn Walker, had no obligation to divulge whether he wanted to marry his same-sex partner before he declared last year that voter-approved Proposition 8 was unconstitutional.

The ruling does not settle the legal fight over Proposition 8.

The US Court of Appeals for the Sixth Circuit is considering whether Walker properly concluded that denying gays and lesbians the right to marry violates their rights to due process and equal protection.

The court also is weighing whether the conservative religious coalition that sponsored the 2008 ballot measure has the legal standing to appeal Walker’s verdict.

Ware’s opinion yesterday was in response to an April motion by coalition lawyers that sought to have Walker’s ruling vacated on conflict-of-interest grounds.

Chad Griffin, president of the American Foundation for Equal Rights, the group that spearheaded the successful effort to overturn Proposition 8 in US District Court, called Ware’s decision to reject the challenge a precedent-setting victory that advances equal rights and treatment for all Americans.

“This bigoted and homophobic motion will prove to be a real low point in the struggle for equality and full civil rights for gay and lesbian people,’’ he said.

ProtectMarriage.com, which filed the challenge, said it would appeal and “continue our tireless efforts to defend the will of the people of California to preserve marriage as the union of a man and a woman.’’

In his ruling yesterday, Ware cited previous cases dealing with women and minority judges in concluding that his predecessor had acted appropriately.

“The sole fact that a federal judge shares the same circumstances or personal characteristics with other members of the general public, and that the judge could be affected by the outcome of a proceeding in the same way’’ as the general public “is not a basis for either recusal or disqualification,’’ he wrote.

Lawyers for backers of the ban argued at a hearing Monday that Walker should have recused himself or disclosed his relationship because he and his partner stood to personally benefit if Proposition 8 were invalidated and same-sex unions were deemed legal again in California.

Walker publicly revealed after he retired in February that he is in a 10-year relationship with a man. Rumors that he was gay had circulated before and after the trial early last year.

Ware crisply rejected the idea that judges who are members of minority groups have more of a vested interest in the outcome of civil rights cases based on the US Constitution than anyone else.

“We all have an equal stake in a case that challenges the constitutionality of a restriction on a fundamental right,’’ Ware wrote. “The single characteristic that Judge Walker shares with the plaintiffs, albeit one that might not have been shared with the majority of Californians, gave him no greater interest in a proper decision on the merits than . . . for any other judge or citizen.’’

Ware said that Walker did not have a duty to disclose his private life and would have hurt “the integrity of the judiciary’’ if he had revealed his relationship as part of the Prop. 8 proceedings.

Many legal scholars had not expected Ware to overturn Walker’s decision. They said having a judge’s impartiality questioned because he is gay is new, but past efforts to disqualify female judges in gender discrimination cases or Hispanic judges in immigration cases have failed.