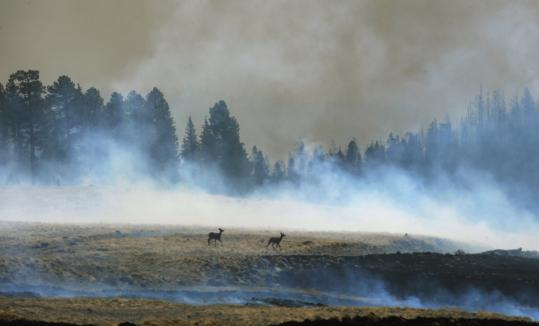 Two elk evaded the wildfire in the forest around the Lee Valley recreational area in the Apache National Forest in Arizona. The blaze had spread over more than 600 square miles and crossed the border into New Mexico. (Kevork Djansezian/ Getty Images)
By Brian Skoloff Associated Press / June 13, 2011

SPRINGERVILLE, Ariz. — Firefighters yesterday expressed the first real hope that they were making progress in their battle against a huge eastern Arizona wildfire burning since May, and officials began allowing about 7,000 residents to return home to two mountain towns that had been in peril.

About 2,700 other people who live in resort communities in the Apache-Sitgreaves National Forest remained under an evacuation order.

Firefighters said they were finally gaining ground against the 693-square-mile inferno that has already burned across the state line into New Mexico, even as the winds picked up and containment remained at just 6 percent.

“Everything is holding,’’ said Jerome Macdonald, the fire operations chief. “Compared to what we’ve been dealing with just two days ago. . . . We’re feeling a lot more confident.’’

Fire crews remained in Springerville and the nearby town of Eagar, guarding against flare-ups, but Webb Hogle, an Apache County sheriff’s commander, said residents could return because the blaze was “no longer a threat to the citizens.’’

On the road into Springerville, a flashing sign read: “We missed you, welcome home.’’

“I just cried when I drove past that sign,’’ said Jane Finch, who had just returned to Eagar and had a tearful reunion with her husband, who stayed behind to keep the Circle K convenience store open for firefighters.

About 30 homes and cabins have been destroyed since the fire began May 29.

The fire still threatened the mountain towns of Alpine, Nutrioso, and Greer, where officials said residents may not be allowed back for five more days.