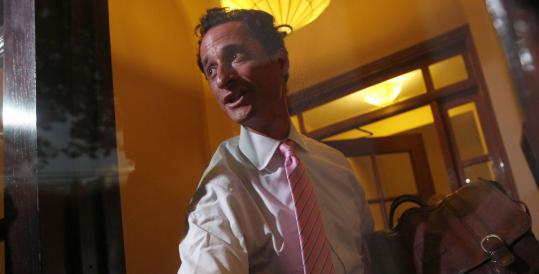 Mitt Romney is planning to forgo the Iowa straw poll — a political tradition that is often seen as an early barometer of a candidate’s organizational strength — as he continues to downplay his chances in a state that was seen as vital to his campaign four years ago.

“Our campaign has made the decision to not participate in any straw polls, whether it’s in Florida, Iowa, Michigan, or someplace else,’’ campaign manager Matt Rhoades said last night in a statement.

The decision continues an approach Romney has taken to limit his early activity in the presidential nominating contest, while also carefully managing his political expectations.

Romney spent lavishly to win the straw poll four years ago, only to raise expectations to a level he wasn’t able to match. He later lost the Iowa caucuses to Mike Huckabee, the former governor of Arkansas.

Although Romney will not participate in the mid-August straw poll, he is still likely to compete in the Iowa caucuses next February. But his decision to opt out of the straw poll — a process held dear by Iowa Republicans and one that helps raise significant funds for the state party — could damage his chances by irking the party faithful.

It also goes against comments that Romney himself made during his last campaign, when he was trying to goad other GOP hopefuls to spend more time in Iowa.

“If you’re going to participate in the Iowa process, then you better get in the straw poll,’’ he said at the time. “If you don’t think you can participate and win in Iowa in August, how are you going to win in November of ’08?’’

Former Minnesota governor Tim Pawlenty’s campaign seized on the news yesterday, and implied that Romney was unwilling to face voters.

In a statement, Matt Whitaker, chairman of Pawlenty’s Iowa steering committee, said: “The Ames straw poll is a great gathering of conservatives, and Governor Pawlenty’s solid record will be well received there.’’

But without Romney competing in the straw polls, the meaning may diminish for the winners. Florida Republicans are also planning to hold a straw poll in September that, without Romney, probably will be less significant.

Gulf is wide in budget talks between GOP, White House WASHINGTON — Vice President Joe Biden and GOP negotiators sparred over taxes yesterday in a private meeting that exposed their wide differences as the clock ticks on negotiations to let the government resume borrowing more than $100 billion a month to pay its bills.

Both sides hope to pass the measure well before an early August deadline to avoid a first-ever, market-rattling default on US obligations.

It was the sixth meeting between Biden and top lawmakers. With the talks moving slowly, they agreed to pick up the pace with three meetings next week.

In the two-hour meeting, Biden and Treasury Secretary Timothy Geithner made a pitch for more revenue. Republicans are resolutely opposed to anything that could be called a tax increase.

The White House push for revenues is noteworthy because Democrats will have to provide votes to get the final measure passed, with many House Republicans who are backed by the Tea Party movement likely to oppose any measure to increase the debt limit.

Counterterrorism chief tenders his resignation WASHINGTON — A former fighter pilot who was an important terrorism-fighting official in the Bush and Obama administrations is resigning after four years on the job, the White House said yesterday.

Michael Leiter, director of the National Counterterrorism Center, is credited with helping put in place major changes after a bomb plot against a Detroit-bound airliner was foiled in 2009. The attempted attack highlighted a failure among government agencies to share intelligence.

Leiter’s departure comes little more than a month after the killing of Al Qaeda leader Osama bin Laden in Pakistan, one of the top US counterterrorism goals. President Obama said Leiter had provided the national security team “an in-depth understanding of terrorist activities.’’

White House spokesman Jay Carney said Leiter’s departure was his own decision. Leiter also contributed to the White House’s forthcoming new changes in national counterterrorism strategy, which will outline what an administration official called “a broad, sustained, and integrated campaign against Al Qaeda.’’

The official said the strategy will help coordinate US counterterrorism efforts with those of its allies.