Two senators ask Obama to justify US role in Libya 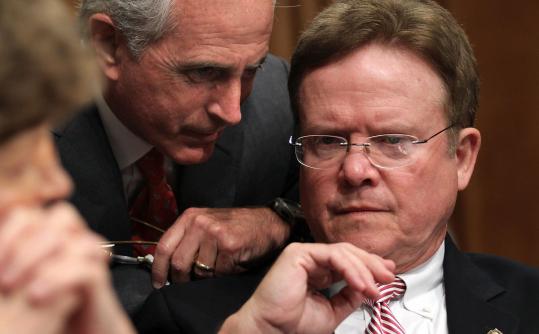 WASHINGTON — A resolution before the US Senate pressures President Obama to seek congressional consent for continued US military involvement in Libya and requires the administration to provide a detailed justification for the decision to go to war.

Senators Jim Webb, a Virginia Democrat, and Bob Corker, a Tennessee Republican, introduced the resolution yesterday, expressing the same frustration with the commander in chief as House members who on Friday voted to rebuke Obama for not seeking authorization from Congress when he ordered airstrikes beginning March 19 against Moammar Khadafy’s forces.

The US Constitution says Congress has the power to declare war, and the 1973 War Powers Resolution requires the president to obtain congressional authorization within 60 days of the start of military operations, a deadline that passed last month.

“The issue . . . is whether a president, any president, can unilaterally begin and continue a military campaign for reasons that he alone has defined as meeting the demanding standards of a vital national security interest worthy of risking American lives and expending billions of dollars of our taxpayers’ money,’’ Webb said. “What was the standard in this case?’’

Corker said it has been more than 80 days since the first US military action “but neither the Congress nor the American people have any clearer view of the administration’s stated mission or endgame for our military involvement in Libya.’’

While the rebels have made gains in Libya, Khadafy has maintained his grip on power, saying he will fight to the death.

The Senate resolution mirrors the House measure in arguing that Obama failed to provide a “compelling rationale’’ for US action in Libya. It also prohibits US ground forces in Libya except to rescue a US service member and requires the administration to answer within two weeks about 20 questions on the scope of the mission, its costs, and the impact on the wars in Iraq and Afghanistan.

Going beyond the House resolution, the measure expresses the sense of the Senate that Obama should request congressional authorization for continued US military action. NATO commands the operation, but the United States still plays a significant support role that includes aerial refueling of warplanes along with intelligence, surveillance, and reconnaissance.

Corker said he expects the Senate to debate the resolution next week, but its prospects remain unclear as several senators favor a stronger endorsement of the US mission. Senators John Kerry, Democrat of Massachusetts and Foreign Relations Committee chairman, and John McCain, an Arizona Republican, have proposed such a measure.

The White House maintains that it has been in compliance with the War Powers Act and has called the resolutions unhelpful and unnecessary.

Group sees progress on plan to cut deficit
WASHINGTON — A member of the “Gang of Six’’ senators working on a bipartisan plan to wrestle the deficit under control said yesterday that the group has identified $4.7 trillion in spending cuts and revenue increases that could be made over the next decade.

Senator Saxby Chambliss, Republican of Georgia, told a group of economists in Washington that there’s no agreement on the plan but that the deficit savings could be even higher — up to $6 trillion — if it boosts economic growth and tax revenues.

The group has been toiling for months to produce a plan in hopes that it might gain momentum in the Senate and serve as the basis for a long-term solution to the nation’s chronic debt woes. But it has failed to seal an agreement so far. The focus in Washington has instead shifted to negotiations led by Vice President Joe Biden.

The idea driving the Gang of Six, now down to five, is that an agreement within the group — whose members include a leading liberal in Dick Durbin, Democrat of Illinois, and one of the most prominent conservatives in Coburn — would provide the catalyst to swing dozens more senators behind their work.

The group is trying to craft a deficit-slashing plan along the lines of the $4 trillion package that Obama’s deficit commission put together last year.