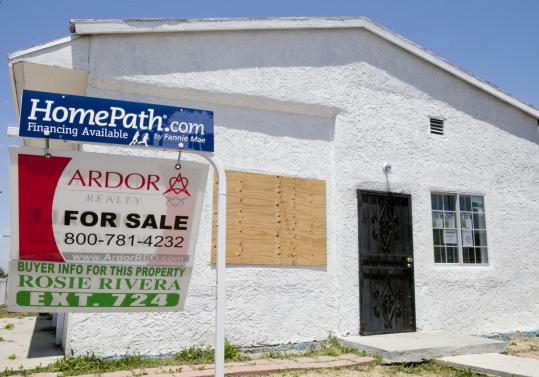 NEW YORK — The Obama administration’s main program to keep distressed homeowners from falling into foreclosure has been aimed at those who took out subprime loans or other risky mortgages during the heady days of the housing boom. But these days, the primary cause of foreclosures is unemployment.

As a result, there is a mismatch between the homeowner program’s design and the country’s economic realities — and a new round of second-guessing about how best to fix it.

The administration’s housing effort includes programs to help unemployed homeowners, but they have been plagued by delays, dubious benefits, and abysmal participation.

For example, a Treasury Department effort started in early 2010 allows the jobless to postpone mortgage payments for three months, but the average length of unemployment is now nine months. As of March 31, there were only 7,397 participants.

“So far, I think the public record will show that programs to help unemployed homeowners have not been very successful,’’ said Jeffrey C. Fuhrer, an executive vice president of the Federal Reserve Bank of Boston.

Data released last week suggest that the administration’s task is growing more difficult as the problems created by unemployment and housing trends persist. New job growth in May was anemic, and unemployment inched up to 9.1 percent, the Labor Department reported Friday.

Last week, a widely watched index found that housing prices had dropped to their lowest level in nearly a decade. And while the rate of homes falling into foreclosure has slowed, the reason is delays in processing foreclosures, not a housing recovery, according to RealtyTrac, a company that tracks foreclosures. There were 219,258 foreclosure filings in April, the latest month available.

Critics of the Obama administration’s approach to preventing foreclosures have pressed for two years to get officials to focus more on unemployed homeowners, with meager results. As part of the bank bailout, the Treasury Department was given $46 billion to spend on keeping homeowners in their houses; to date, the agency has spent about $1.85 billion.

Morris A. Davis, a former Federal Reserve economist, estimates that as many as a million homeowners slipped into foreclosure because of insufficient help for the unemployed.

“The money was there and they didn’t spend it,’’ said Davis, an associate real estate professor at the University of Wisconsin. “I don’t mean to sound outraged, but I am pretty outraged.’’

Administration officials said their programs have had a positive impact, although not as large as they had hoped. But they say the problems of unemployment and negative equity on homes are not easily solved. They also say programs to curb foreclosure are voluntary, so they are limited in how far they can push mortgage servicers and investors, who often make more from foreclosures than from offering aid.

“We are trying to be careful in designing programs that at the end of the day aren’t just about spending money but getting people back on their feet,’’ said James Parrott, a senior adviser at the White House’s National Economic Council.

President Obama has been scrambling to curb the number of foreclosures ever since he arrived at the White House.

At the start of 2009, the administration announced its primary foreclosure prevention initiative, the Home Affordable Modification Program. It provides incentives to banks to modify mortgages, reducing monthly payments for eligible homeowners.

The administration said the program would help 3 million to 4 million homeowners, but so far, only 670,000 homeowners have received permanent modifications. In addition, the program was primarily meant for homeowners with risky mortgages; jobless owners are often ineligible because some payment, albeit reduced, is required.

Administration officials said the program was helping homeowners whose income had been reduced. Sixty-one percent of homeowners who received permanent modifications listed “curtailment of income’’ as their reason for applying, though it is not known how many of them are unemployed or simply had their hours or pay reduced.

Though the program was announced last fall, so far applications are being accepted in only five states; the others are delayed because of “implementation challenges,’’ a HUD spokeswoman said.

Many unemployed or underemployed homeowners said they would welcome an extended break in mortgage payments.

Mary Ernest, 51, of Blackstone, Mass., lost her job as a school aide and said she has been “reduced to begging, more or less,’’ to keep her home.

Adam Heyman, 41, of Chelsea, Mass., scraped together enough money to pay the mortgage on his condominium for about 18 months. Though he finally got another full-time job, his bank had already foreclosed on his condo.

“If I had a way to slow down the process or stop it for a while, that would have been nice,’’ Heyman said, adding, “Now I can certainly afford to pay.’’