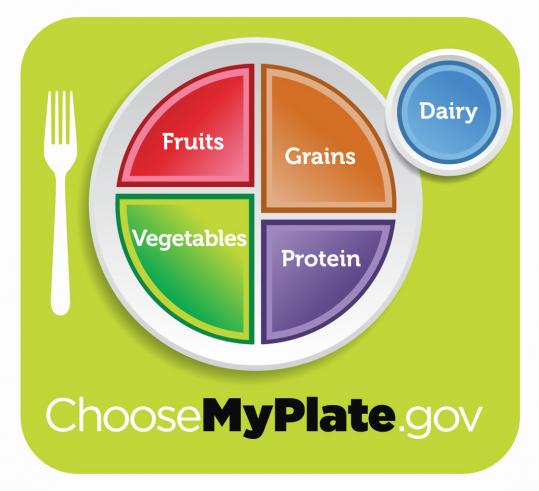 In an effort to simplify the message it gives the public on healthy eating, the federal government yesterday unveiled a new icon to replace the complicated and confusing food pyramid: It’s a plate divided into four sections, with fruits and vegetables on one half and protein and grains on the other. A circle for dairy — indicating a glass of milk or container of yogurt — rests to the right of the plate.

“The new icon is simple and easy to understand, with more emphasis placed on fruits and vegetables,’’ Surgeon General Regina M. Benjamin said in a statement. It’s designed, she said, to “help individuals and families make healthier meal choices.’’

Michelle Obama, who was involved in the “MyPlate’’ initiative as part of her efforts to prevent childhood obesity, said in a statement that it’s important for parents to scan their children’s plates. “As long as they’re half full of fruits and vegetables, and paired with lean proteins, whole grains, and low-fat dairy, we’re golden,’’ the president’s wife said. “That’s how easy it is.’’

Outside experts generally agree that a plate is far better than a pyramid in helping visualize what the composition of meals should look like.

“I’ve been doing this for years with my clients — showing them how to divide their plate,’’ said Joan Salge Blake, a registered dietician at Boston University.

She added that eating more produce, which ounce for ounce has fewer calories than meat or starches, can be an effective weight loss strategy for the two-thirds of Americans who are overweight, because it “fills you up before it fills you out.’’

Looking at the plate symbol alone won’t be enough for Americans to determine what to eat. They have to click on each symbol on the website (www.choosemyplate.gov) of the US Department of Agriculture, which designed the plate to replace its pyramid, to identify healthful protein and grain choices.

They also won’t see any room for dessert on the plate and no mention of oils or dietary fats of any kind. (Foods with both protein and fat — like nuts and red meat — fall into the protein category.)

While researcher Walter Willett, chairman of the nutrition department at the Harvard School of Public Health, said the new plate is a “step in the right direction’’ with “reasonable proportions,’’ he said it doesn’t provide enough information to really guide Americans.

He said he would like to see some mention of dietary fats — which ones to choose, such as olive oil — and which to avoid, such as the trans fats in margarine and deep fried foods. And he thinks that protein choices should not all be listed equally because nuts, fish, and skinless chicken breast are more healthful overall than red meat, even cuts that are lean.