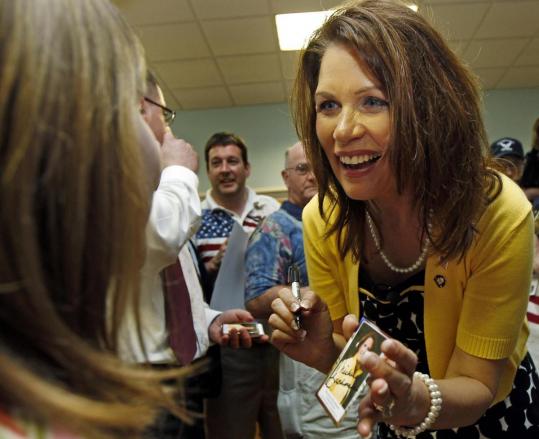 Representative Michele Bachmann gave an autograph to a young girl at an event to pay tribute to veterans yesterday in Dover, N.H. Bachmann, a Minnesota Republican and a favorite of the Tea Party movement, said if she runs, she will focus on jobs. (Adam Hunger/ Reuters)
By Shira Schoenberg Globe Correspondent / May 31, 2011

On a Memorial Day sweep across New Hampshire, Bachmann, a potential presidential candidate, was greeted enthusiastically by Republicans and Tea Party activists, who have made Bachmann a conservative icon. Bachmann said last week that she will announce in June, in her birthplace of Waterloo, Iowa, whether she plans to run for president in 2012.

Bachmann did not say whether a run by 2008 vice presidential nominee Sarah Palin — another Tea Party hero — would affect her decision.

“The person that I compare myself to is Barack Obama and I think that’s a very favorable comparison,’’ Bachmann said, when asked about Palin.

Bachmann said if she runs, her focus will be on American jobs. “As a former tax lawyer I understand what needs to be done to have American-made jobs again,’’ she said. “The Chinese understood for their economy to grow they need to make things in their country. My focus is on making things in the United States again.’’

But Bachmann spent yesterday focused on veterans. She attended a private gathering with a mother whose son died in Afghanistan, followed by a North Hampton Memorial Day parade, then a Strafford County and Dover Republican Committee Memorial Day celebration.

She ended at a house party at the Franklin home of former gubernatorial candidate Karen Testerman, who used the event to launch an organization, First Principles, aimed at “celebrating marriage’’ and placing a constitutional amendment defining marriage as between one man and one woman on the New Hampshire ballot in 2012.

In speeches laden with patriotism and history, Bachmann praised New Hampshire soldiers who served from the Revolutionary War through today. She cited the idealism of Abraham Lincoln, and of General John Stark of New Hampshire who coined the phrase that is the state motto “Live Free or Die.’’

She talked about the Declaration of Independence’s inalienable rights of life, liberty, and the pursuit of happiness. “These are rights only God can give to mankind,’’ she said. “Government may not bestow them and, never forget, government cannot take them away.’’ She thanked veterans for being willing to lay down their lives for liberty.

In January, Bachmann angered veterans by proposing $4.5 billion in spending cuts to veterans, through capping increases in health care spending for the Department of Veterans Affairs and reducing veterans’ disability compensation to account for Social Security payments.

After criticism, Bachmann backed away from the cut. “We heard from a number of veterans that we needed revision to that plan,’’ she said yesterday. “We were very happy with the results.’’

Yesterday, several veterans said they like Bachmann. Cherrilynn Bisbano, a Navy and Air National Guard veteran from Hampton, has not decided who to support but likes Bachmann because she is conservative, against abortion, and “not wishy-washy.’’

“If you have a strong belief in life and a belief in God, you’ll base all your decisions on that,’’ Bisbano said.

Bachmann’s only foray into policy came during a question-and-answer session in Franklin. Asked about the Middle East, Bachmann stressed her support for Israel and opposition to President Obama’s position that Israel must return to its pre-1967 borders. “Israel could not survive if the president got his way,’’ Bachmann said.

Bachmann said the biggest danger in the Middle East is Iran, under President Mahmoud Ahmadinejad, getting nuclear weapons. Ahmadinejad has said he wants to destroy Israel. “When you have madmen like Hitler you listen to them. . . . They usually tip their hand,’’ Bachmann said. “We have a madman in Ahmadinejad.’’

Bachmann criticized Obama for using military force against Muammar Khadafy in Libya. “Khadafy posed no threat to us, didn’t attack us, nor is there any vital US interest in Libya,’’ she said. “For a dictator, he was fairly benign.’’

Shira Schoenberg can be reached at sschoenbergnh@gmail.com