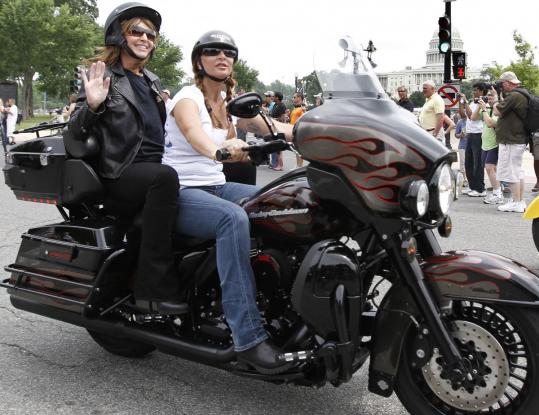 Sarah Palin arrived at the ride on a Harley yesterday. The former Alaska governor gave no hint on whether she will run for president, telling someone, “I don’t know yet.’’ (Manuel Balce Ceneta/Associated Press)
Washington Post / May 30, 2011

WASHINGTON — Sarah Palin brought some chaos and political buzz to the 24th annual Rolling Thunder motorcycle ride yesterday, riding into the Pentagon parking lot around noon on the back of a Harley and quickly drawing a crowd of reporters, fans, and gawkers.

Palin’s decision to make the ride a kickoff stop in a weeklong tour of historic sites of the Northeast caused consternation among some attendees while renewing speculation about the former Alaska governor’s political future, including a possible run for the GOP presidential nomination.

Palin and her staff have given no hint of her purpose in staging these events, and they declined to offer any details about the coming stops on the tour. Instead, they have been putting updates online.

Many Rolling Thunder attendees said they were happy to have Palin there as long as she didn’t distract the focus from the veterans’ cause. The ride is held every year to raise awareness for prisoners of war and troops missing in action.

When Palin arrived, Rolling Thunder security staffers repeatedly yelled at members of the news media to get away from the bikes, saying that equipment worth upward of $20,000 could be damaged in the scrum.

One staffer grabbed a photographer by his throat and shoved him backward.

Onlookers expressed concern for Palin’s safety. “The girl needs a bodyguard,’’ one woman said. But Palin stood in the middle of it all, signing books and leather jackets.

“I don’t know yet,’’ Palin told a crowd member who asked whether she was running for president.

“I’m very not appreciative of the way she came in here,’’ Ted Shpak, Rolling Thunder’s national legislative director, said of Palin’s arrival, citing the chaos around the bikes. “If she wanted to come on the ride, she should have come in the back.’’

Palin, the 2008 Republican vice presidential candidate, came in the front of the Pentagon’s north parking lot, where event staff and reporters were assembled. Motorcyclists began lining up there early, and by the time Palin arrived, the lot was full.

She was accompanied by her husband and daughters — Todd rode with Piper behind him, and Bristol sat behind another biker.

After the ride, Palin kept a low profile. She did not speak at the rally that followed the ride; she ate lunch with wounded veterans from Walter Reed Army Medical Center in a tent blocked off from the crowd.