Giffords sends a U2 favorite to shuttle aloft 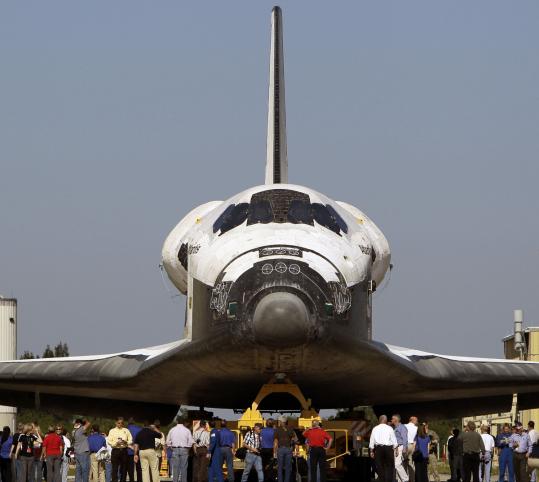 Atlantis, which will fly the final shuttle mission of the 30-year NASA program, was prepared yesterday for its final launch at the Kennedy Space Center in Cape Canaveral, Fla. (John Raoux/Associated Press)
Associated Press / May 18, 2011

CAPE CANAVERAL, Fla. — After a poignant wake-up song requested by wounded US Representative Gabrielle Giffords for her astronaut husband, Endeavour and the two other space shuttles each marked milestones yesterday for the retiring fleet.

Back at the Kennedy Space Center launch site, Atlantis, which will fly the final shuttle mission of the 30-year program, moved for the last time from its hangar to the massive Vehicle Assembly Building.

In orbit, Endeavour was catching up to the International Space Station, aiming for a 6:16 docking this morning. Endeavour’s day started with the traditional music wake-up call. The song: “Beautiful Day’’ by U2.

It’s the same song Giffords picked for Mark Kelly in 2006 when they were just dating. But this time the message-of-hope lyrics seemed to have a special meaning, given her recovery from a gunshot wound to the head Jan. 8 in Arizona.

Giffords is scheduled for another surgery today in Houston. Doctors will put in a plastic implant to replace a piece of her skull that was removed after the shooting, to allow room for brain swelling.