Scouts were stranded, but prepared 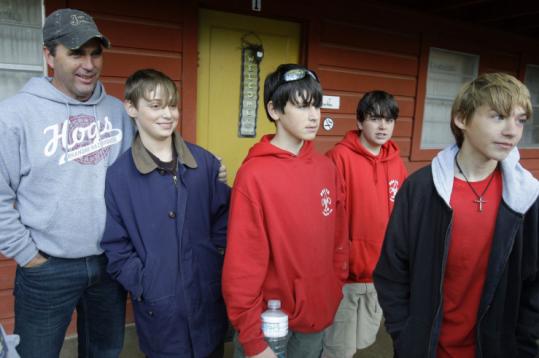 LANGLEY, Ark. — Six Louisiana Boy Scouts stranded by high water in an Arkansas forest said after being reunited with their families yesterday that they never feared camping in an area where 20 people died in a flash flood last summer.

“I was worried that my parents would freak out,’’ said Ian Fuselier, 13.

A National Guard helicopter plucked the boys and two scoutmasters from the Albert Pike Recreation Area at daybreak yesterday after the boys’ parents spent 36 hours awaiting their rescue.

Allen Miller, the father of 13-year-old Stephen Miller, was confident of a happy ending.

“I wasn’t worried, not with that group,’’ Miller said.

According to one parent, the boys had considered a camping trip to Mississippi, but selected Arkansas as an alternative because of last week’s tornadoes in the South. Arkansas weather was gloomy when they arrived last Thursday, and the heavy rain that started Saturday quickly swelled creeks and streams.

“They’re always prepared for that,’’ said Jonah Fuselier, Ian’s father, of the weather.

Scoutmaster Jeff Robinson said there were two planned river crossings on their hike. The first wasn’t a problem as the Little Missouri River was only knee-high. The second was deeper than usual, up to the chest, and as much as 70 feet wide.

“I realized the water was too strong to cross the river with the boys,’’ Robinson said.

The leader said their only trouble was starting a fire in the rain. They packed in enough food and water that they could have stayed for another three or four days, he said. The boys ate jambalaya, eggs, and grits while awaiting their rescue.

The Scouts camped above the flood plain where 20 people died in a flash flood last June 11. Robinson said he was aware of the deaths but wasn’t concerned. “We’re not going to let nature frighten us away,’’ he said.

The National Guard helicopter crew initially spotted the boys’ campfire overnight Monday and tossed down ponchos, food, water, and blankets — plus a radio that couldn’t pick up a signal.

“Our pilots had to wait on sunlight to be able to get in and land,’’ Major Chris Heathscott said in an e-mail.

About 6:30 a.m., the pilot landed in a clearing about 300 yards from the campsite and ferried the eight out in two trips, delivering them to a camp supply store where parents and relatives applauded their arrival.

No one needed medical attention, although one Scout had a cut on a leg, Heathscott said.

The parents waited Monday night at a local church in a scene eerily similar to one nearly a year before. Families waited with pastor Graig Cowart for news on whether their loved ones had survived the rising water.