Storms leave a trail of devastation

Tornadoes kill 290 in six states across the South 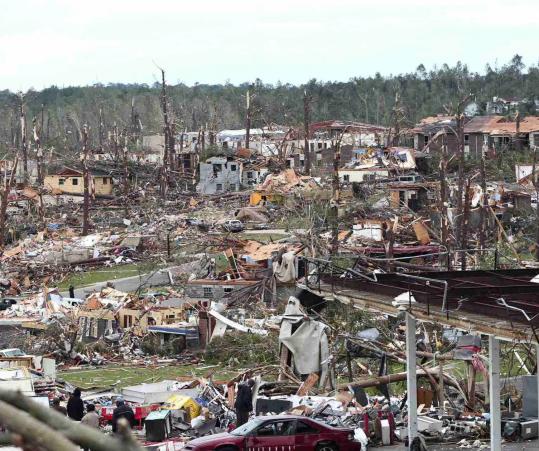 Part of Pratt City, a suburb of Birmingham, Ala., lay in ruins yesterday after a tornado struck overnight. (Marvin Gentry/Reuters)
By Greg Bluestein and Holbrook Mohr Associated Press / April 29, 2011

PLEASANT GROVE, Ala. — Firefighters searched one splintered pile after another for survivors yesterday, combing the remains of houses and neighborhoods pulverized by the nation’s deadliest tornado outbreak in almost four decades. At least 290 people were killed across six states — more than two-thirds of them in Alabama, where large cities bore the half-mile-wide scars the twisters left behind.

The death toll from Wednesday’s storms seems out of a bygone era, before Doppler radar and pinpoint satellite forecasts were around to warn communities of severe weather. Residents were told the tornadoes were coming up to 24 minutes ahead of time, but they were just too wide, too powerful, and too locked onto populated areas to avoid a horrifying body count.

“These were the most intense super-cell thunderstorms that I think anybody who was out there forecasting has ever seen,’’ said meteorologist Greg Carbin at the National Weather Service’s Storm Prediction Center in Norman, Okla.

“If you experienced a direct hit from one of these, you’d have to be in a reinforced room, storm shelter, or underground’’ to survive, Carbin said.

The storms seemed to hug the interstate highways as they barreled along like runaway trucks, obliterating neighborhoods or even entire towns from Tuscaloosa to Bristol, Va. One family rode out the disaster in the basement of a funeral home, another by huddling in a tanning bed.

In Concord, a small town outside Birmingham that was ravaged by a tornado, Randy Guyton’s family got a phone call from a friend warning them to take cover. They rushed to the basement garage, piled into a Ridgeline and listened to the roar as the twister devoured the house in seconds. Afterward, they could see outside through the shards of their home and scrambled out.

“The whole house caved in on top of that car,’’ he said. “Other than my boy screaming to the Lord to save us, being in that car is what saved us.’’

At least three people died in a Pleasant Grove subdivision southwest of Birmingham, where residents trickled back Thursday to survey the damage. Greg Harrison’s neighborhood was somehow unscathed, but he remains haunted by the wind, thunder, and lightning as they built to a climax, then suddenly stopped.

Governor Robert Bentley of Alabama said his state had confirmed 204 deaths. There were 33 deaths in Mississippi, 33 in Tennessee, 14 in Georgia, five in Virginia, and one in Kentucky. Hundreds if not thousands of people were injured — nearly 800 in Tuscaloosa alone.

Some of the worst damage was about 50 miles southwest of Pleasant Grove in Tuscaloosa, a city of more than 83,000 that is home to the University of Alabama. The storms destroyed the city’s emergency management center, so the school’s Bryant-Denny Stadium was turned into a makeshift one. School officials said two students were killed, though they did not say how they died. Finals were canceled and commencement was postponed.

Mayor Walter Maddox of Tuscaloosa told reporters that police and the National Guard would impose a curfew at 10 p.m. yesterday. and 8 p.m. today. Authorities have been searching for survivors, but Maddox said they will begin using cadaver dogs today.

That twister and others Wednesday were several times more severe than a typical tornado, which is hundreds of yards wide, has winds around 100 miles per hour and stays on the ground for a few miles, said research meteorologist Harold Brooks at the Storm Prediction Center.

“There’s a pretty good chance some of these were a mile wide, on the ground for tens of miles and had wind speeds over 200 miles per hour,’’ he said.

The loss of life is the greatest from an outbreak of tornadoes in the United States April 1974, when, the weather service said, 315 people were killed by a storm that swept across 13 Southern and Midwestern states.

Search and rescue teams fanned out to dig through the rubble of devastated communities that bore eerie similarities to the Gulf Coast after Hurricane Katrina in 2005, when town after town lay flattened for nearly 90 miles.

In Phil Campbell, a small town of 1,000 in northwest Alabama where 26 people died, the grocery store, gas stations, and medical clinic were destroyed by a tornado that Mayor Jerry Mays estimated was a half-mile wide and traveled some 20 miles.

“We’ve lost everything. Let’s just say it like it is,’’ Mays said. “I’m afraid we might have some suicides because of this.’’

President Obama said he would travel to Alabama today to view storm damage and meet Bentley and affected families. As many as a million homes and businesses there were without power, and Bentley said 2,000 National Guard troops had been activated to help. The governors of Mississippi and Georgia also issued emergency declarations for parts of their states.

“We can’t control when or where a terrible storm may strike, but we can control how we respond to it,’’ Obama said.

The storm prediction center said it got 164 tornado reports around the region, but some tornadoes were probably reported multiple times and it could take days to get a final count.

In fact, Brooks said 50 to 60 reports — from the Mississippi-Alabama line, through Tuscaloosa and Birmingham and into Georgia and southwestern Tennessee — might end up being a single tornado. If that is true, its path would be one of the longest on record, rivaling a 1925 tornado that raged for 219 miles.

Brooks said the weather service was able to provide about 24 minutes’ notice before the twisters hit.

“It was a well-forecasted event,’’ Brooks said. “People were talking about this week being a big week a week ago.’’

Carbin, the meteorologist, said that the warning gave residents enough time to hunker down, but not enough for them to safely leave the area.

“You’ve got half an hour to evacuate the north side of Tuscaloosa. How do you do that and when do you do that? Knowing there’s a tornado on the ground right now and the conditions in advance of it, you may inadvertently put people in harm’s way,’’ he said.

American Red Cross — Text REDCROSS to 90999 to add $10 automatically to your phone bill or go to www.redcross.org or call 1-800-RED-CROSS.