Fears for old levees rise along with rivers

Across US, many in need of repairs 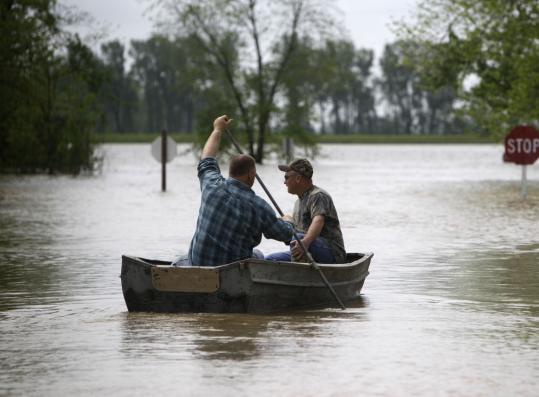 DUTCHTOWN, Mo. — Floodwaters leaking past an old earthen levee in this river town highlight a larger problem threatening much of rural America: Scores of flood walls built decades ago by farmers are increasingly susceptible to failure.

Many of the barriers are little more than piles of compacted dirt that were constructed without help from engineers, mainly to protect crops. Now they shield entire communities, and they are managed by local authorities who have little or no money for repairs.

“You build them to the levels that you hope are adequate,’’ said Jeff Rolland, deputy police chief in Poplar Bluff, a Missouri town of 17,000 people protected by just such a levee. “Unfortunately, extraordinary storms come along.’’

That’s what happened this week. As much as 15 inches of rain fell on the region in four days, causing the Black River to climb out of its banks. The flood displaced more than 1,000 people and sent water over the Poplar Bluff levee.

The levee is one of more than 100 across the country considered by the federal government to be unfit for use. The failing levees are in 16 states. As still more rain fell yesterday, all eyes were on the flood walls.

The Reorganized Butler County No. 7 levee at Poplar Bluff failed a federal inspection in 2008. And the heavy rain took a swift toll. Water seeped through the levee, poured over the top in 35 places, and gushed through a hole in the middle of the barrier.

Many rural levees are privately maintained and overseen by local boards or commissions with limited expertise and resources. Even if the officials who oversee the Poplar Bluff levee had the money to fix it, the poor government rating makes them ineligible for federal assistance.

“It was dropped from the program,’’ said Tony Hill, chief of the emergency management office for the Army Corps of Engineers office in Little Rock, Ark.

“They were given a period of time, given a year to get things right. They are inactive in the program. They aren’t eligible for federal dollars to fix the levee.’’

The quality of small-town levees varies greatly. Most are made of mounded dirt that has been sloped and then topped with grass to reduce erosion.

Others are more complex, with spillways, drainage systems, and pumps.

But for cities and private levee districts that are strapped for cash, levees are often little more than earthen berms, like the one at Poplar Bluff, about 130 miles south of St. Louis.

“People don’t realize the levee is there until the water starts rising,’’ said Tom Waters, chairman of the Missouri Levee and Drainage District Association. “The local districts do what they can, but sometimes it’s cheaper to be out of compliance and fix it yourself than be in compliance.’’

A 2009 Army Corps survey identified 114 levees nationwide that were “unacceptable for operations and maintenance,’’ including three others in Butler County, 30 in Arkansas, and 27 in California. The survey lists structures from Alamosa, Colo., on the Rio Grande, to the Bethlehem levee in the Pennsylvania town of the same name.

After Hurricane Katrina, Congress in 2006 gave money to the Army Corps to update its inventory of the federally maintained levees, which make up 14,000 miles of flood barrier across the nation.

But there’s no systematic oversight — or even a complete inventory — of the nearly 100,000 miles’ worth of private levees. Congress passed the National Levee Safety Act in 2007 and directed the Army engineers to account for all private levees, but no money was provided for the task.

“You can’t really generate any interest until right after a disaster,’’ said Stephen Verigin, a civil engineer in Sacramento, Calif., and a member of the National Committee on Levee Safety. “If you don’t have an immediate failure in the recent past, it’s very difficult to get support.’’

The levee safety committee made 20 specific recommendations, including creation of a National Levee Safety Commission that would help write and enforce uniform engineering standards and work with states to bolster local efforts.

So far, no one has acted on those suggestions.

Yesterday, Poplar Bluff and other southern Missouri towns endured more rain and the threat of tornadoes from the second severe storm system in as many days.

The good news, said a National Weather Service hydrologist, Mary Lamm, is that today should be dry, and the rivers should begin to recede. But “it’s still going to be a lot of strain on a lot of the levees,’’ Lamm said.