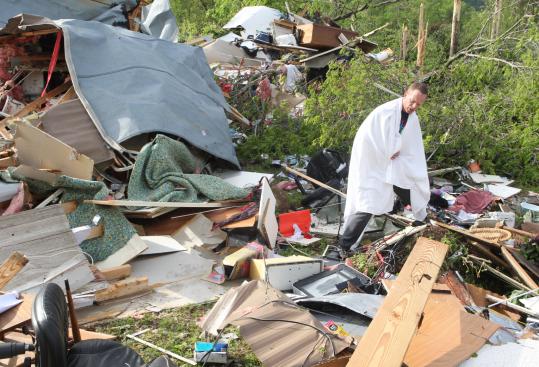 A resident of Garland County, Ark., looked for his cellphone yesterday in the remains of his home after a tornado hit the area. (Richard Rasmussen/The Sentinel-Record/Associated Press)
Associated Press / April 27, 2011

POPLAR BLUFF, Mo. — A powerful storm system that spawned a deadly tornado in Arkansas caused rivers to swell yesterday across the Midwest, straining levees that protect thousands of homes and forcing panicked residents of one town to flee for higher ground.

Six inches of rain fell Monday in the southeastern Missouri community of Poplar Bluff, bringing the four-day total to 15 inches. The deluge caused the Black River to pour over a levee in 30 places and to break through in one spot, and about 1,000 homes were evacuated. Deputy Police Chief Jeff Rolland said it was a “miracle’’ that the levee held until late morning.

The levee extends from Poplar Bluff to the town of Qulan downstream, in a sparsely populated area. Butler County Sheriff Mark Dodd said water pouring through a breach between the two towns was unlikely to make it far enough upstream to threaten Poplar Bluff, a town of 17,000 residents south of St. Louis.

Flooding in 2008 damaged or destroyed hundreds of homes in Poplar Bluff, raising questions about whether the levee was capable of protecting the town during times of heavy rainfall.

The storm system has dumped relentless rain on several states over the past week, including Arkansas, Illinois, Indiana, Kentucky, Missouri, Mississippi, and Tennessee.

As the worst of the system moved north and east into Illinois, Wisconsin, Kentucky, and Tennessee, the region was bracing for a second round of storms expected to roll into Oklahoma and Arkansas later yesterday.

The National Weather Service issued a high risk warning last night for severe weather in a stretch extending from northeast of Memphis to just northeast of Dallas and covering a large swath of Arkansas. It last issued such a warning on April 16, when dozens of tornadoes hit North Carolina and killed 21 people.

Forty-five tornado warnings had been issued in Arkansas by last night. A number of trees fell on homes and at least one vehicle, but no new injuries were reported.