Lawmakers on defensive at town meetings 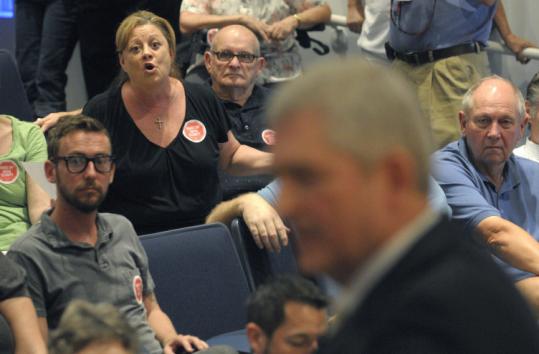 FORT LAUDERDALE, Fla. — In Orlando, a congressional town meeting erupted into near chaos yesterday as attendees accused a Republican lawmaker of trying to dismantle Medicare while providing tax cuts to corporations and affluent Americans.

At roughly the same time in Wisconsin, Representative Paul Ryan, the architect of the Republican budget proposal, faced a packed town meeting, occasional boos, and a skeptical audience as he tried to lay out his party’s rationale for overhauling the health insurance program for retirees.

In Fort Lauderdale yesterday evening, at a meeting with constituents, Representative Allen West was met with jeers about his 2010 campaign.

“You’re not going to intimidate me,’’ West said, as hundreds of supporters stood and whooped it up for him.

After 10 days of trying to sell constituents on their plan to overhaul Medicare, House Republicans in multiple districts appear to be increasingly on the defensive, facing worried and angry questions from voters and a barrage of new attacks from Democrats and their allies.

The proposed new approach to Medicare — a centerpiece of a budget that Republican leaders have hailed as a courageous effort to address the nation’s long-term fiscal problems — has been a constant topic at town-hall-style sessions and other public gatherings during a two-week congressional recess that provided the first chance for lawmakers to gauge reaction to the plan.

An example of the response came yesterday as Representative Daniel Webster, a freshman Republican from Florida, faced an unruly crowd at a packed town meeting in Orlando, where some attendees, apparently organized or encouraged by liberal groups, brandished signs like “Hands Off Medicare’’ and demanded that he instead “tax the rich.’’

Webster, shown in video from station WFTV, sought to defuse the situation by telling constituents that any changes were years away and current retirees would not see a difference.

“Not one senior citizen is harmed by this budget,’’ he said, noting that his new granddaughter was “looking at a bankrupt country.’’

Under the Republican budget proposal, Medicare would be converted into a program that would subsidize health coverage for retirees rather than have Medicare provide coverage directly, a change that many Democrats say would risk leaving the elderly with inadequate health care as costs rise over the long run. The Republican budget would also transform Medicaid, which pays for nursing homes for low-income residents, into a grant program to states, raising the possibility that states, under budget pressure, would cut coverage.

Democrats face political pressure as well to show that they can bring spending under control and rein in the growth of the national debt, and there are fissures within the party about whether to back tax increases and raise the national debt ceiling without concrete steps to bring down the budget deficit.

Before the release of Ryan’s proposal, Republicans had expressed confidence public opinion had turned in their favor, and yesterday House leaders sought to reassure Republicans their budget approach would eventually carry the day. Led by Speaker John Boehner of Ohio, Republicans held a conference call urging House members to tell voters that it is the Obama administration’s spending plan that would cost jobs and ration health care.

Officials familiar with the call said that rank-and-file lawmakers did not seem alarmed at the response they were getting, and Ryan told his fellow Republicans he had been successful in making the case that Medicare would go bankrupt without intervention. Ryan said he stressed with his constituents that those over 55 or currently on Medicare would still be covered under the existing program.

But news reports noted that Ryan himself faced a mixed response from constituents as he conducted tense town meetings with voters, some of whom were turned away because of overflow crowds. It was just another indication that Republicans still have a big selling job to do on their budget, especially to older constituents who tend to turn out to vote at higher rates than younger people.