Damage from St. Louis tornado expected to cost millions, but no deaths reported 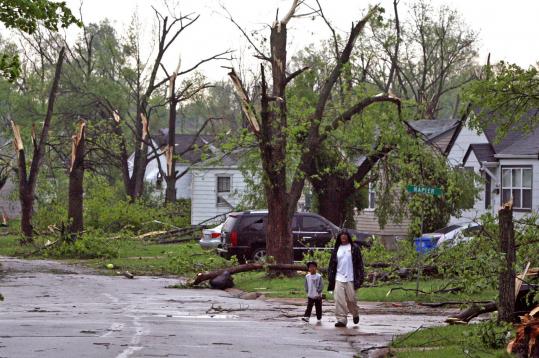 ST. LOUIS — Lambert-St. Louis International Airport reopened less than 24 hours after the St. Louis area’s most powerful tornado in 44 years ripped into the main terminal and through a densely populated suburban area.

The tornado destroyed up to 100 homes, shattered hundreds of panes of glass at the terminal, and blew a shuttle bus on top of a roof. Yet no one was killed or even seriously hurt.

Early warnings, good timing, and common sense all helped prevent a tragedy Friday night. But on Easter Sunday, many of those cleaning up the mess also thanked a higher power.

“I don’t know why God decided to spare our lives, but I’m thankful for it,’’ Joni Bellinger, children’s minister at hard-hit Ferguson Christian Church, said yesterday.

Another round of severe thunderstorms and possibly tornadoes is expected to strike the southern states later this week, according to the US Storm Prediction Center in Norman, Okla. The center said an area from southern Ohio to Mississippi, including Atlanta and Cincinnati, is likely to see thunderstorms, high winds, and tornadoes.

Friday’s tornado peaked at an EF-4 level, second-highest on the Enhanced Fujita scale, packing winds of up to 200 miles per hour, according to the National Weather Service. It was the most powerful twister in metropolitan St. Louis since 1967.

Entire subdivisions were destroyed. Cars were blown about like toys, roofs tossed hundreds of yards, and 100-year-old trees sucked out by the roots. Governor Jay Nixon said 750 St. Louis-area homes were damaged. The damage will cost millions of dollars to repair.